• By Monday, desert locusts had spread to eight counties —Mandera, Wajir, Marsabit, Garissa, Isiolo, Meru, Samburu and Laikipia — and now they're flying to Baringo and Turkana. 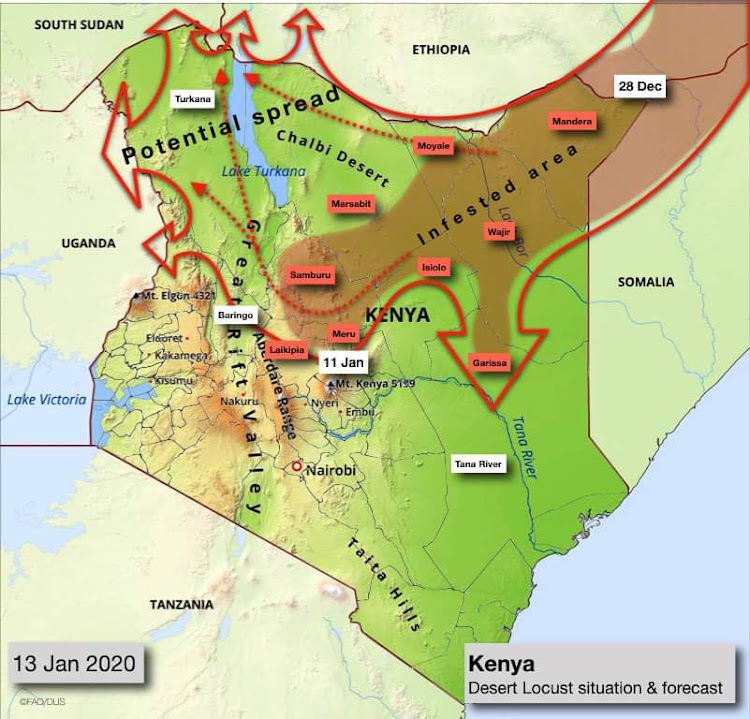 Desert locusts are munching their way to Baringo and Turkana counties — bringing the total of infested counties to 10.

The update is from the desert locust situation update released on Monday by the UN-Food and Agriculture Organization.

The Locust Watch indicated a significant and extremely dangerous increase in swarm activity during the past week in Kenya.

“Numerous, large immature swarms are spreading from the initial invasion areas of Mandera county to Wajir and Garissa. Then west along the Ethiopia border of Moyale and Marsabit counties and southwest into central areas north of Mt Kenya including Isiolo, Samburu, Meru and most recently Laikipia counties,” the report read.

In all areas, there is an unprecedented threat to food security and livelihoods. In the northeast, some swarms have started to mature.

The report said more swarms are expected to occur in these areas, some of which are already moving north of Mt Kenya westwards to Baringo county where they could continue northwest to Turkana county.

Others will move west along the Ethiopian border, and some swarms could move further south to Tana River county.

“In all areas, there is an unprecedented threat to food security and livelihoods. In the northeast, some swarms have started to mature, which means that egg-laying could be imminent in open areas of sandy moist soil where eggs would hatch after about two weeks and give rise to numerous hopper bands in February,” the UN food agency said.

In Somalia, mature swarms are present in the Garbahare area near Mandera county. In Ethiopia, immature swarms continue to form and move in the eastern regions of Harar in East Harerghe and Somali in Jijjiga and Warder, Kebridehar, Gode in the Ogaden.

“Limited ground and aerial control operations are in progress in Ethiopia where 3,700 hectares have been treated so far in January, and by DLCO-EA, national and county agencies and the private sector in parts of Kenya.

So far, survey and control operations have not been mounted in central and southern Somalia due to insecurity. Aerial control efforts need to be urgently and very quickly upscaled in all countries, FAO said.

The Locust Watch shows that important breeding continues in the winter breeding areas along the coastal plains of the Red Sea where control operations are in progress against hopper groups.

County and national governments urged to treat the invasion as an emergency
Counties
3 years ago
Post a comment
WATCH: The latest videos from the Star
by AGATHA NGOTHO Science Writer
Rift Valley
14 January 2020 - 20:00
Read The E-Paper