•On November 1, seeds of 13 species that had been selected for aerial seeding were planted

•Tobiko said 100 per cent of the settlers had vacated, paving way for reclamation of the catchment 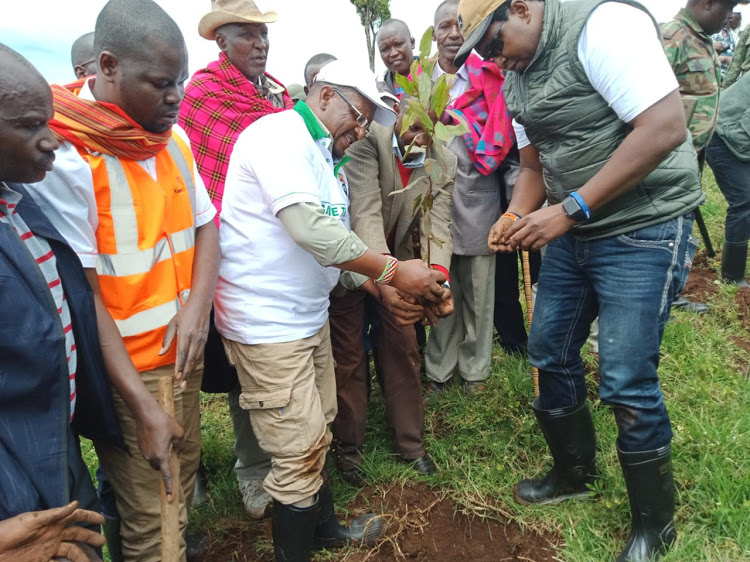 Settlers who encroached on Maasai Mau forest were finally kicked out this year, paving way for restoration of East Africa's largest water tower.

About 22,000 acres were recovered after phase two of the evictions.

Environment CS Keriako Tobiko, who led the exercise, said on November 1:"It has been 30 years of stories after stories on why evictions from Mau cannot be done. The narrative has been grafted that this is an individual’s agenda. Nothing can be further from the truth."

Restoration efforts have now gained momentum, with Environment CS Tobiko leading the exercise to plant more than a million trees.

Some 200,000 seedlings were planted manually that day. An aircraft, on the other hand, dropped more than four million seed balls.

"This is especially in areas where crop cultivation has been done for a long time and is, therefore, a key element in aiding natural restoration of degraded forests, water catchments, arid and semi-arid lands and woodlands," she said.

Seeds in nature are dispersed through various means including by wind, water, anthropogenic methods, animals, birds and by various modes of transport (air, sea, road and rail).

Aerial seeding is a technique of sowing seeds by spraying them by air means such as using drones, planes or helicopters.

A total of 1,981 kilogrammes from the 13 tree species were broadcast in Maasai Mau. This is estimated to have included approximately 60 million individual seeds, which will yield an estimated 30 million seedlings at a conservative germination rate of 50 per cent.

Tobiko said 100 per cent of the settlers had vacated, paving way for the reclamation of the catchment area.

The 60-day window for people to voluntarily move out lapsed October 30.

However, scores could still be seen struggling to move their crops out. Tobiko said the process was humane and that no bullet was fired.

"No houses have been burned contrary to what politicians say in funerals and barazas,” Tobiko said.

The CS noted that the illegal settlers were moved out not because the government hated them. However, he said, millions of people had been subjected to suffering due to encroachment.

Tobiko said there had been a terrible disconnect between the government and politicians. During the first phase of eviction, 11,000 acres were recovered.

In the second phase, Tobiko said it would take years for the area to be recovered.

Owing to good rains that have been pounding various parts of the country, all the tree seedlings planted in November have survived.

Chief conservator of forests Julius Kamau said the favourable weather conditions have ensured that all the trees survived.

"I can confirm that the entire trees planted are doing well due to favourable weather conditions," Kamau told the Star on phone.

"I applaud the adjacent communities for complementing the Kenya Forest Service and stakeholders by participating in the ongoing tree-planting activities."

This, he said, is through the formation of community forest associations that will inform legal frameworks through which they can sustainably benefit from forest resources.

The government said phase two of evictions targeted more than 10,000 households who had encroached on the forest.

Close to Sh1 billion is needed for the restoration exercise.

Following the successful evictions from Maasai Mau, Tobiko sent clear signals that the government would go after those who have encroached on Kenya's water towers.

The CS explained that the next evictions from the country's largest water tower will be the big fish.

"There will be no sacred cow," he promised the National Assembly's committee on environment.

Former President Daniel Moi is among the prominent people cited by the committee as owning huge chunks of land in the Mau forest.

The government has also set its sights on other encroachers inside the gazetted  Marmanet forest in Laikipia.

The forest is a key elephant migratory corridor and water catchment area.

CS Tobiko said 100 per cent of the settlers have vacated.
News
3 years ago

The rehabilitation of the tower followed the moving out of illegal settlers.
News
3 years ago

Kenya’s forest cover is currently at 7.2 per cent.
News
3 years ago