Stanbic Bank, the guarantor, was compelled to refund the cash to after Hong Kong Offshore Oil Services Limited failed to do the job.

• The Chinese firm was awarded the tender in 2014.

• They had been contracted to build 15-20 wells in Baringo. 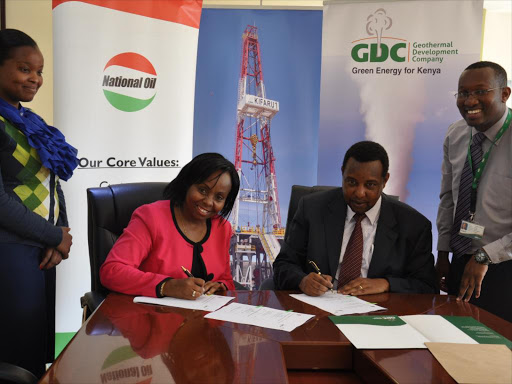 The Geothermal Development Company has recovered Sh1.4 billion awarded to a Chinese contractor for drilling at the Baringo-Silali project.

The company will proceed with its own drilling after the Chinese company vanished despite being paid the Sh1.5 billion, a 25 per cent advance of the contract sum.

“We will proceed with our own drilling operations. Already there is one rig at the site and we have completed drilling of the two wells. The recovery of the funds will boost our operations in the region,” GDC boss Johnson Nchoe in a statement.

Nchoe said that Stanbic Bank, the guarantor, was compelled to refund the cash to after Hong Kong Offshore Oil Services Limited failed to do the job.

The tender was advertised in 2014 and the Chinese firm handed the award notification on 10 November that year.

The Chinese firm was contracted to drill 15-20 geothermal wells in Bogorua-Silali in Baringo. But no wells had been drilled by this year.

A report prepared for the GDC board by general manager George Muya shows that two months after signing the contract in 2016, the Chinese firm wrote to GDC requesting an advance payment.

Muya reports the request was denied and in October, GDC wrote to the Chinese firm asking them to submit the payment guarantee within 30 days.

“HOOSL responded to this letter on October 8, 2016, by informing GDC that they are working on the issuance of the guarantee with a local bank," reads the report.

On October 20 2016, HOOSL sought an extension of the timeline for submission of the guarantee by an additional 60 days, the report says.

The geothermal company accepted the extension which was to lapse in December 2016.

However, a few days to the deadline, the Chinese firm asked for another extension by two months, which was accepted.

Still, when the two months were up in February, the firm had not issued a guarantee.

The firm would later submit an advance payment guarantee of Sh1.4 billion from Stanbic bank. The guarantee was to expire in December 2018.

When Stanbic confirmed the guarantee, the payment process through the Energy and National Treasury began and the Chinese firm confirmed receipt of the money in September 2017.

However, by December 2018, their payment guarantees had expired and drilling machines in Baringo had remained unused.

In the report issued on Wednesday, the geothermal company has said it will proceed with its own drilling operations.