Grass will be harvested, new seedlings will be planted providing pasture

• It will also reduce conflicts among communities competing for pasture during drought befause there will be more pasture for all. 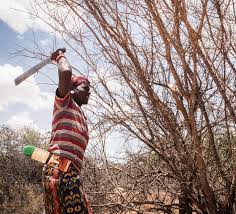 Pastoralistsin Samburu's Namunyak area are cutting down and burning an invasive acacia tree and planting grass to conserve rangelands.

The tree, also known as red-bark acacia, red thorn and false umbrella thorn, invades rapidly and nothing grows under it or around it. The area becomes barren and grass cannot grow.

Getting rid of the acacia is a rangeland conservation strategy intended to grow more grass, harvest it and store of use during dry spells.

Conflicts with other pastoralists occur when they invade areas in search of pasture during dry spells.

The initiative is supported by the Northern Rangelands Trust (NRT) which supports 39 community conservancies in the country and local communities.

pastoralists are now planting grass seedlings across 1,2400 hectares and the heavy rains are promoting their growth.

At least 70 per cent of grasslands in northern Kenya are severely degraded, due to invasive acacia and over-grazing.

Kinywa Namachar, the chairman of Namunyak Community Conservancy, said the initiative has salvaged their grassland. He said the local Samburu grazing community has decided that all herders must stay away from the entire area under management to allow grass to grow to maturity.

CEO of the Northern Rangelands Trust, Tom Lalampaa, emphasised the need for the pastoralist community to adhere to regulations set by their grazing committee to endure the initiative succeeds.

“At least 70 per cent of grasslands in northern Kenya are severely degraded," he said, citing invasion of the acacia and over-grazing.

Management of the grasslands will benefit communities, livestock and wildlife as well as build climate change-resilience among communities.

He said the move to increase grasslands will also reduce conflicts among pastoralist communities during dry seasons because all herders converge in areas where there is little pasture.

Lalampaa said if all communities actively engage in proper rangeland management, then there will be no need for them to keep moving to distant areas whenever there is drought.

Namunyak is one of the largest community conservancies in the country, comprising six group ranches and covering 328,000 hectares.