No roads or bridges mean no relief aid, no burials

Some victims haven't received drugs, food and clothes one week since the landslide

•Many bridges and roads have been swept away by floods hamper aid deliveries. Some landslide victims have not received any aid because of bad roads. 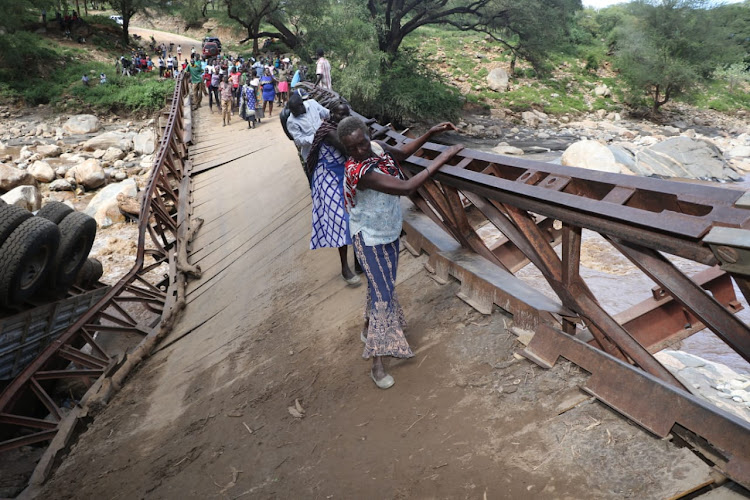 Some West Pokot landslide victims have not received food, medicine, blankets and other supplies since the disaster hit a week ago.

Residents complain about bad roads throughout the country but nowhere is the situation worse than in West Pokot, where it's a matter of life and death.

At least 53 people were killed and thousands displaced as a massive mudslide swept away villages last weekend.

Aid can't get through.

Burial plans have been put on hold as bodies cannot be transported.

An already primitive road network and rickety bridges are hampering the delivery of food and supplies to landslide victims, who have moved to several camps on safer ground.

Rains have washed away many roads and bridges, making transport impossible except after emergency repairs and except by helicopter.

The worst-hit camp is Tamkal where three bridges to the camp have been washed away. They connect the camp to the county headquarters where most donated food and supplies have been stored.

The Chepera, Marich and Ortum bridges have been washed away, cuttting off transport.

On Thursday a lorry transporting food aid rolled over and fell into River Muruny.

Stecol corporation site manager Coa Jinseng said the company was moved by the plight of the victims and decided to contribute food.

People want to start burying the dead from Monday but without roads there will be no funerals.

“We work in this area and we were touched by the tragedy where children were most affected," he said.

Respiratory ailments are common, especially in children, in cold, wet weather then they are without shelter.

The community welcomed the assistance and was pitching in to ensure the road was tarmacked quickly.

“We are trying to help so they don't feel neglected and offering a shoulder to cry on to relieve their stress," he said.

Ndingili said the Red Cross has captured the biometric data of everyone affected and will be following up to ensure that they are on the road to recovery.

Some families won't be able to bury their relatives if roads and bridges are not repaired soon, West Pokot Governor John Lonyangapuo said.

“Most families want to bury their loved ones from Monday but they won't be able to transport bodies if the bridges are not repaired,” he said.

Lonyangapuo called on the national government to speed up reconstruction of the damaged bridges.

“Most services have been grounded since we cannot move. The government should find a possible solution as soon as possible, he said.

More than Sh2 billion is needed to start repairing the damage caused by flooding and landslides, the governor said.

The Kitale-Lodwar highway at Ortum market has also been cut off.
Counties
9 months ago