• Kinyua and Waigwa say Kiunjuri has what it takes to be the next number two in the country and safeguard the political interests of the vast region with over six million voters. 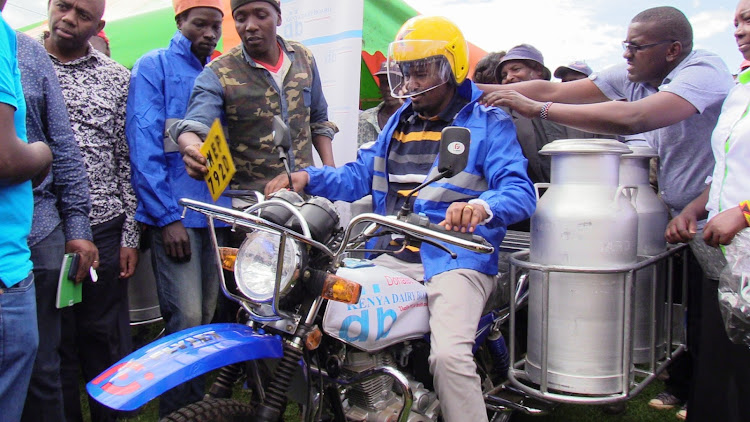 A section of Laikipia leaders have endorsed Agriculture CS Mwangi Kiunjuri as the next Mt Kenya kingpin.

They also want him to be Deputy President William Ruto's running mate in the 2022 presidential election.

Led by Laikipia Senator John Kinyua and county assembly speaker Patrick Waigwa, the leaders said Kiunjuri has what it takes to be the next number two and safeguard the political interests of the vast region with over six million voters.

They spoke on Saturday in Laikipia, where the CS distributed a milk cooler worth over Sh10 million, two motorbikes and thousands of avocado seedlings to farmers in Mia Moja, Magutu and Ngenia trading villages. The leaders said Kiunjuri is the second most influential leader in Mt Kenya after President Uhuru Kenyatta.

"Kiunjuri was Laikipia East MP for three terms and an assistant minister before he was elevated as CS by Uhuru, now it's time to have him deputise Ruto in 2022 as he is well-versed in high leadership positions in this country."

Waigwa said Kiunjuri is the only leader in Mt Kenya who can rally residents to speak in one voice when Uhuru retires.

"Let us look at the big picture in succession matters and rally behind one of our own so that our interests are taken care of in the next government because if we don't identify a person to push our agenda, we shall not have a voice in the future," the assembly speaker said.

Kiunjuri steered clear of the succession debate and urged residents to support the avocado farming initiative by the government. He said the fast-maturing crop would start yielding fruit for sale locally and at the international market. The crop matures in three years.

"These plants, if well-nurtured, will give you returns of up to Sh22,000 per tree annually after three to five years from now. Water the plants adequately and you shall reap the fruit in a short while," Kiunjuri told residents.

The CS also unveiled a milk cooling plant, motorcycles and milk cans donated to Ngenia Farmers’ Cooperative by the Kenya Dairy board.

Uhuru said Kiunjuri was not writing because it was not related to agriculture.
News
2 years ago