• At Ngong dumpsite, resident’s houses are barely 500 meters from the dumpsite

• Wanjiru said sewer waste, which has been directed to the dumpsite, has worsened the situation. 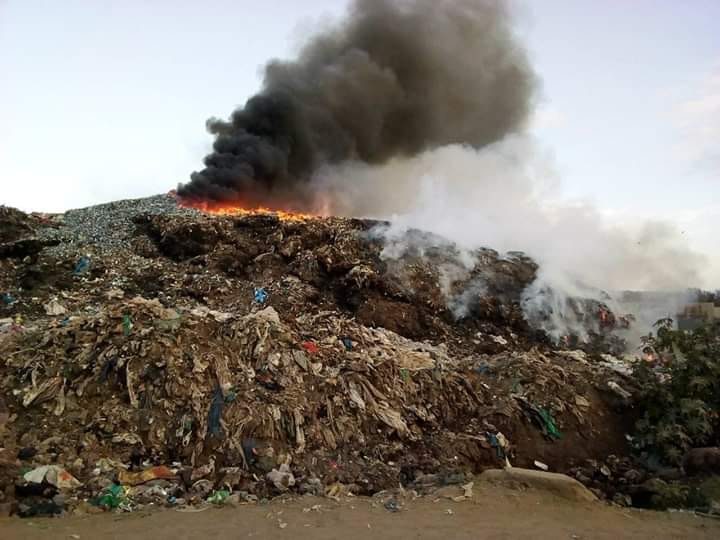 Huge smoke billowing out of the Ngong Dumpsite. Locals residing near are fearing for their lives.
Image: Courtesy

The Star established that waste is discarded into an open dumpsite and some of it is burnt openly.

Ann Wanjiru’s shop is a few metres from the site.

“This dumpsite is a disaster waiting to happen. There was a time when county officials came and said the dumpsite would be moved, but nothing has happened,” she said.

Wanjiru said the smoke from the dumpsite had become an eyesore and a health hazard.

“Many people from this village are dependent on the dumpsite. It would have been nice for the dumpsite to be moved elsewhere,” she said.

Wanjiru said sewer waste, which has been directed to the dumpsite, has worsened the situation.

A research done in 2016 and published in the International Journal of Epidemiology shows the health of those within five kilometres of waste sites is at risk.

These were linked to exposure to endotoxins, microorganisms, and aerosols from waste collection and landfills.

This is consistent with other studies but the association between living close to landfill sites and cases of lung cancer was a new finding.

The authors stressed that further studies need to be completed to confirm this.

At Ngong dumpsite, residents' houses are barely 500 metres from the dumpsite.

Schools, churches, shops, among other social amenities, are within the dumpsite.

Beside the dumpsite is what looks like a public cemetery.

The dumpsite is not fenced off.

Previous plans to relocate the dumpsite to Kibiku seemed to have flopped.

The Kibiku landfill had been proposed by authorities as a possible site where waste was to be sorted and recycled.

The Kajiado government had partnered with the Italian Agency for Development Cooperation under the leadership of the Environment Ministry to put up the new facility at an estimated cost of Sh2 billion.

The old dumpsite would have been decommissioned before the new 20-acre landfill site developed.

Nothing much has happened.

National Environment Management Authority Director of Environment for Kajiado County Joseph Kopejo said they have continually raised pertinent issues of the dumpsite with the county government.

“The county government is responsible for the dumpsite. The county is working to relocate it and the process has been initiated. It however takes time,” Kopejo told the Star.

“Those burning waste are doing so illegally. We had banned burning,” he said.

Semera said the lack of resources had complicated the relocation of the dumpsite.

Some Sh2.5 billion from World Bank has however been approved.

Semera said lack of funds from the national government had also made matters worse.