MP blames corruption for no jobs, calls on youth to join fight

• MP Babu Owino tells youth to be at the forefront in war on graft for their own economic empowerment.

• He blames corruption in governmrnt for lack ofquality healthcare in the country. 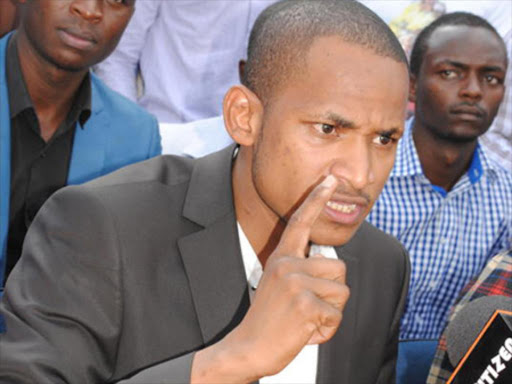 Embakasi East MP Babu Owino has called upon the youth in the country to be at the forefront in the fight against corruption to enable their economic empowerment.

Owino attributed youth unemployment and lack of quality healthcare to corruption in government.

“It is time for the youths to say enough is enough. Let us take the mantle to fight this giant called corruption which has denied us employment. It is because of unemployment that youths are involved in drugs and any other immoral activity,” he said.

The legislator was speaking on Thursday in Maralal town in Samburu county during the commemoration of International Youth Day.

Shebesh said funds set aside for youths are not enough asking county governments to partner with the national government to ensure more youths benefit.

“Government money is not enough for all youth in Samburu county but I assure you if we collaborate, the Youth Fund, Women Enterprise Fund, Uwezo and NGAF with the county government, you will see results,” she said.

Shebesh urged the county government to reserve 30 per cent of the government’s tender for youth, women and people living with disabilities as required by law.

The leaders also supported the handshake between President Uhuru Kenyatta and ODM leader Raila Odinga saying it has united the country.

“After the handshake, you are free to visit any part of the country without fear and that is the Kenya we want where leaders can visit all places without selling their political parties,” Lesuuda said.

Suba North's Odhiambo advised Kenyans and leaders against misunderstanding the handshake between the two leaders.

Irrespective of who the President is, Kenyans have a right to live in a corruption free society.
Siasa
3 years ago

Mucheru: How ministry can use IT to deal with corruption

Report outlines gains in Big 4 agenda and how to curb graft.
News
3 years ago

Everyone has a role to play in the fight against corruption

Judiciary should serve justice to everyone found guilty regardless of their position in society.
Opinion
3 years ago
by MARTIN FUNDI Correspondent, Samburu
Rift Valley
10 August 2019 - 00:00