• The audit has raised questions about how some employees got recruited 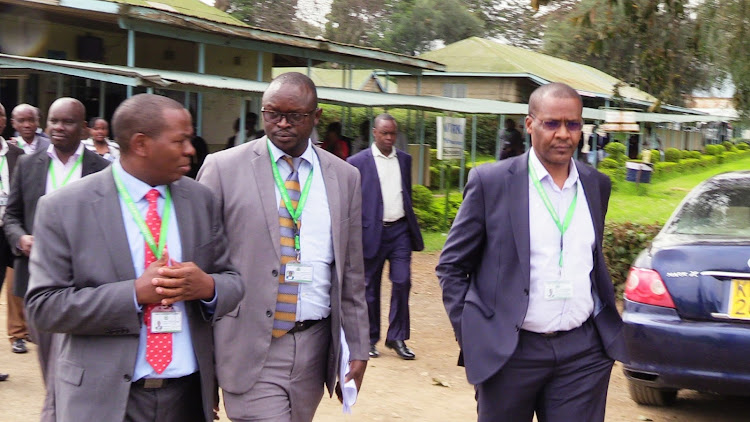 Laikipia Governor Ndiritu Muriithi has warned county employees against inciting others not to participate in the ongoing staff audit.

Speaking on Thursday at his Nanyuki town office, he said the staff audit he launched last month was 75 per cent complete.

The audit, he said, has raised questions about how some employees got recruited.

Muriithi said they had discovered that a good number of the employees lacked the necessary academic documents to hold their current positions.

“Some staff members are running helter-skelter and are now inciting the rest to resist the audit because they have no qualifications and cannot explain how they were employed. We will not allow this to continue," Muriithi said.

He said the recent go-slow and demonstrations by county government workers were being pushed by those opposed to the audit. It was disguised as a clamour for payment of delayed salaries, the county chief said.

Muriithi further said the audit had discovered that a number of employees were not computer-literate and could not log in to the County Operations Management System (COMS) to fill in their time sheets.

He said his government will train them on computer skills once the audit is completed.

Three weeks ago, when the governor launched the staff audit in Nanyuki town, he said it would also help the devolved unit in determining staff competences, the level of education and help in the placement of workers in various sectors of the county government.

“We intend to ensure that our staff have the right jobs depending on their qualifications, determine promotions and help in cleaning the payroll,” Muriithi said.

The month-long drive will capture biometrics of all county government workers and establish a database of their academic qualifications and competences.

The governor said some employees carry out tasks outside their job description. He gave the example of clerical officers who double up as accountants and cashiers.

“We need to address some of these anomalies because if some employees have advanced on their academic training, they deserve to be promoted, so they are motivated and can become more productive,” he said.

The staff audit is seen as a move by the county government as one way to reduce its ballooning wage bill, which the governor said is Sh2.7 billion annually, translating to 55 per cent of the total budget.

Edited by A. Ndung'u

Post a comment
WATCH: The latest videos from the Star
by Eliud Waithaka
Rift Valley
13 July 2019 - 06:00
Read The E-Paper