Dorcus Parit says community hasrefused to come out of injurious practices that interfere with girl-child growth and education. 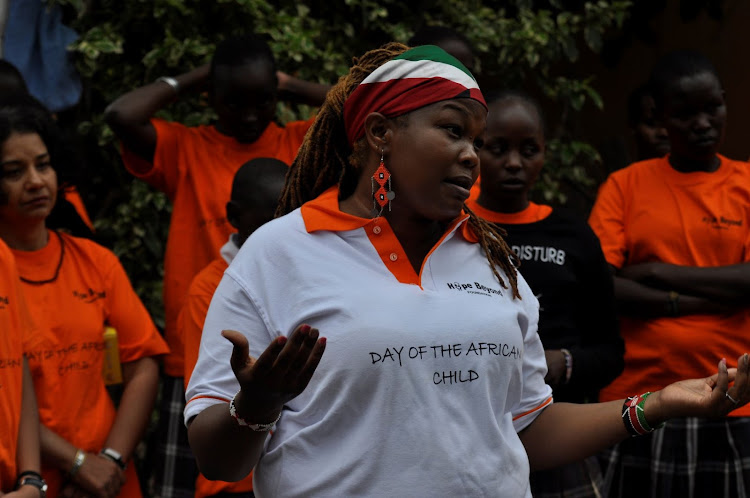 Anti-FGM activist Dorcus Parit said the cultural practices are repugnant to the realisation of gender equality.

Parit is the founder and director of Hope Beyond Foundation that has rescued more than 500 girls from early marriages. The girls were taken back to school.

The activist says she has been labeled an “enemy of Maasai cultural values” because of her resistance to outdated practices.

Speaking in Loitokitok on Saturday, Parit said the law against FGM and child marriages will be strictly followed.

“The government doesn’t care whether it’s a tradition or not. As long as it brings negative effects to the child, legal actions must be taken and justice served to victims and those marrying off their children at a tender age,” Parit said.

She spoke during celebrations to mark the Day of the African Child.

She was accompanied by Loitokitok assistant county commissioner Edwin Okemwa and senior government officials in the area and elders.

“The government will punish those perpetuating and promoting injurious cultures that stop children's access to education, including neighbours who fail to report such cases,” Okemwa said.

He said the government had developed policies to ensure every child is protected from harmful practices.

Although there has been progress in achieving gender equality and women’s empowerment under the Millennium Development Goals, including equal access to primary education between girls and boys, women and girls still suffer discrimination and violence in every part of the world.

Gender equality, Parit said, is not only a fundamental human right but a necessary foundation for a peaceful, prosperous and sustainable world.

“Unfortunately, one in five women and girls between the ages of 15 and 49 have reported experiencing physical or sexual violence by an intimate partner within a 12-month period," she said.

The activist said 49 countries do not have laws protecting women from domestic violence. The claim was based on a UN report on Sustainable Development Goals.

The report states that child marriage and FGM have declined by 30 per cent in the past decade, "but there is still much work to be done to completely eliminate such practices."

“Providing women and girls with equal access to education, healthcare, decent work, and representation in political and economic decision-making processes will fuel sustainable economies and benefit societies and humanity at large," the report says.

Parit said implementing new laws promoting gender equality in the workplace and the eradication of harmful practices targeted at women were crucial to ending gender-based discrimination around the world.

The European Union and the UN are currently embarking on a new global, multi-year initiative focused on eliminating all forms of violence against women and girls.

The initiative is so named as it puts focused attention to the issue, moving it into the spotlight and placing it at the centre of efforts to achieve gender equality and women’s empowerment, in line with the 2030 agenda for sustainable development.

The UN report says the initial investment of Sh56.6 billion will be made, with the EU as the main contributor. Other donors and partners will be invited to join the initiative to broaden its reach and scope.

Parit thanked administrators in the Office of the President for their support in the fight against outdated practices that have shamed women for years.

“While other tribes are struggling to send their daughters to school, we in Kajiado are digging their graves while they are at the tender age of ten. This is killing our generation,” Parit said.

She said they chose to have the celebration in Loitokitok because it is the bedrock of backward practices among the Maasai in Kajiado.