• Githiga, Rumuruti and Ol Moran wards in Laikipia West are the most affected areas.

• Matiang’ i said government resolved to disarm all police reservists for re-vetting. 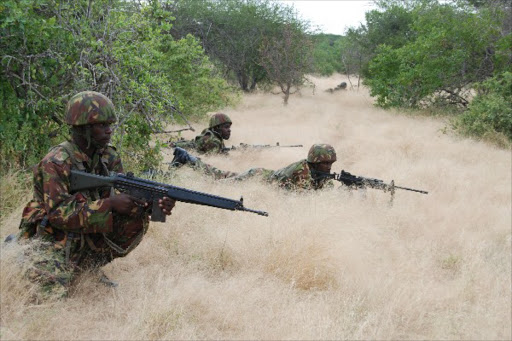 Laikipia leaders have called for immediate deployment of soldiers to stem increasing insecurity.

They urged Interior CS Fred Matiang’ i to send KDF for a sustained operation to flush out bandits.

They criticised the National Security Committee that ordered the withdrawal of guns from NPRs, saying it was unjustifiable and only emboldened the bandits.

“How can a responsible government withdraw guns from legitimate police reservists and leave armed bandits, cattle rustlers and terrorists to roam freely killing and stealing from the people? Are the people meant to protect themselves or is there a silent plan to dislodge them from their homes?” Muriithi said.

Githiga, Rumuruti and Ol Moran wards in Laikipia West are the most affected areas with the recent five banditry attacks leaving police and locals injured and over 100 cows and goats were stolen.

A security chief attached at Jennings Farm in Rumuruti died after he was allegedly shot by illegal herders who had invaded the farm.

Muriithi complained that the national government successfully disarmed and weeded out bandits from Mt Elgon, Boni forest and is managing of the recent Matungu insecurity but is doing nothing in Laikipia.

“The cardinal role of any government is to protect the lives of the people and their property and if it cannot assure its citizens of their security then it is a useless government. It is of no purpose to hold press conferences in Nairobi and speak tough but on the ground you have left armed bandits to hit us at will,” Muriithi said.

During his recent visit to Nanyuki town,  Matiang’ i announced the government resolved to disarm all police reservists for re-vetting.

Muriithi noted the government should have deployed other contingents to stand in as the re-vetting exercise goes on.

“If the issue was to re-vet the NPR, bring the army to replace them because withdrawing the entire force and leaving the citizens unprotected in irresponsible.”

MP Mariru said the CS should use force in fighting illegal weaponry instead of issuing ultimatums to terrorists.

On Wednesday, one person was shot in the stomach in Laikipia North.
News
3 years ago

“The effort to disarm reservists is misplaced because on the other hand bandits are left roaming freely yet the decision makers have no idea of what is going on here," he said.

Kuki Gallman's Laikipia Nature Conservancy is said to be the notorious hideout for bandits believed to be originating from Baringo county.

On Wednesday, armed cattle rustlers made away with 30 sheep belonging to Mary Wangari.

“The cattle rustlers who were armed with guns invaded my home and made away with my 30 sheep. They drove away my animals towards the Laikipia Nature Conservancy as a herdsman and I watched,” said Wangari, a resident of Milimani area in Githiga ward.

On Thursday afternoon, the herders invaded Kamwenje village and made away with 15 goats belonging to Stephen Kahoro.

The previous night, the cattle rustlers had stolen over 60 livestock at Village 18 after invading several homes.

“These criminals are stealing and attacking us even in broad daylight. The region is in dire need of peace to facilitate meaningful development and that is why we want the government to end the menace,” said Nicholas Ndirangu, a resident of Sipili area.

​Meanwhile, the government has dispatched a high level security team to North Rift counties in a bid to end the escalating insecurity.

“The government is deeply concerned by the continued deterioration of security in the North Rift region due to cattle rustling and other criminal acts over the past two months,” read a press statement from the Ministry of Interior.