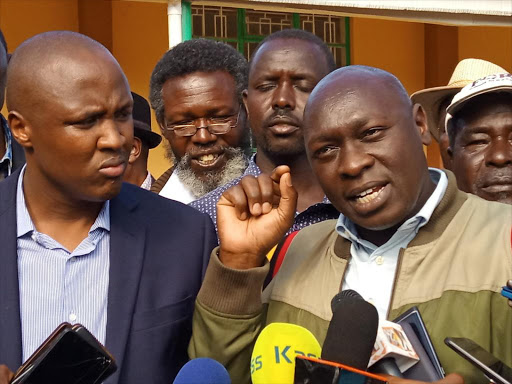 Three North Rift MPs and maize farmers have threatened to stage massive street protests in Eldoret over low maize prices and scandals that have rocked the NCPB.

On Saturday, the growers, led by MPs Alfred Keter (Nandi Hills), Sila Tiren of Moiben and Joshua Kutuny of Cheranganyi, gave the government two weeks to declare Sh3,600 as the new price, up from the Sh2,300 set two weeks ago by the Strategic Food Reserves Fund.

They met in Eldoret town. They also opposed privatisation or restructuring of the National Cereals and Produce Board and New KCC, arguing that cartels were planning to take over the two state corporations.

"We want to stand and be counted with farmers. It has been easy for the government to pay importers better prices, but when it comes to farmers, we have to fight endlessly,” Tiren said.

The Jubilee lawmakers sparked a storm after they demanded that DP William Ruto and his allies be investigated over the maize and fertiliser crises. They accused Ruto of giving farmers false promises and asking them to grow alternative crops such as avocados and cabbages.

The DP should shelve his 2022 presidential ambitions and tackle the problems hurting Kenyans first, they said.

Keter said they had decided to tell the truth about the maize scam, adding that only President Uhuru Kenyatta would be able to save farmers. He linked Ruto and his allies to the cartels that had been messing up the sector.

"We want to tell the DP that we know the problems and cartels frustrating farmers are directly linked to him and his office. That’s why we want all leaders probed. We are also ready to be probed,"

The leaders said the DP recently visited Congo Brazzaville for more than a week where he allegedly planned to start maize farming on 500,000 acres. The maize would be imported into the country, further frustrating local farmers, they said.

Tiren termed it unwise to tell farmers to opt for avocado and cabbage farming, yet Kenyans have not been dissuaded from eating ugali, their staple food.

“Let the audit begin right from the President himself, just as he said, then to the DP and all the way down, including me.”

Tiren warned those who were involved in the maize scandal to brace themselves for life in jail. Rift Valley residents and Kenyans in general are not interested in numerous harambees by Ruto’s team while farmers and poor Kenyans suffer, the MPs said. They declared that they are ready to play hardball if that’s what it will take to save farmers and poor Kenyans.

The director of Kenya Farmers Association Kipkorir Menjo said they will reject the Sh2,300 proposed for a 90kg bag of maize. He said Sh3,600 is the least they expect from the government and must be paid within seven days after every delivery.

“That was the price at which they imported maize. So why is it painful to buy maize from local farmers at the same price?” Menjo asked.

“Those coming here to tell us we should plant avocados and cabbages should be investigated to let us know what changed. They are playing games that are hurting our people.”

The farmers will meet again in Eldoret this week and have planned to meet President Kenyatta to raise their grievances.

Millers say, however, that Sh3,600 for a bag will increase the price of two-kilogramme unga to Sh150, double the current price.

Peter Kuguru, the chairman of small-scale millers under the United Grains Millers Association, yesterday said a 90kg bag currently goes for Sh1,800 in the market and a two-kilogramme packet of unga retails at Sh75.

“If the government sets the price of a 90kg bag at Sh3,600, the price of a 2kg packet will increase to Sh150. This will make the cost of living expensive for Kenyans who are already burdened with tax increases,” he said.

The millers said this will be counterproductive for farmers as people will opt for other products and avoid expensive maize flour and its products. Kuguru cautioned against politicisation of maize, and told farmers to desist from attempts to set the price of maize.

“The price of maize is determined by the market forces. It’s an offence for farmers to get together and decide the price. The prices of farm produce are always determined by supply and demand and not the growers,” he said.

Kuguru plans to write to the Competition Authority of Kenya to protest against the decision by North Rift farmers to set their own maize prices. Such actions deny consumers the right to fair pricing value, he said.

The Competition Authority of Kenya was established under the Competition Act, 2010, to promote and protect effective competition in the market and prevent misleading trade behaviour.