Phillip Murgor and his brothers battle over late dad’s property 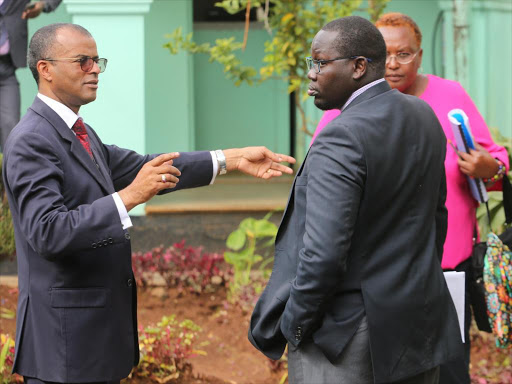 Former Director of Public Prosecutions Philip Murgor is caught up in a family row over the sharing of his father’s estate, valued at more than Sh2.8 billion.

The estate is Spread out in Uasin Gishu and Elgeyo Marakwet counties.

The late Charles Murgor served as Nyanza Provincial Commissioner and was a younger brother of Kerio Central MP, the late William Murgor.

In the latest case, Philip has differed with his step-brothers over family property, including 1,400 acres of land.

The former PC died 24 years ago and left four widows among them Philip Mugor’s mother Christine Chebor, who has since passed on.

He had 24 children including the former DPP. Philip and his brother Gilbert Murgor have sued at the High Court in Eldoret to block their step-brothers and their mothers from sharing the 1,400 acres.

On Friday, the former DPP told Justice Olga Sewe that his mother, who was a nurse, bought the land using a loan from the Agricultural Finance Corporation.

“The land solely belonged to the deceased and my step-brother cannot therefore demand a share of it,” said the former DPP.

Philip’s step-brothers - Peter Murgor, Henry Murgor, Austine Murgor and George Murgor - want the land counted as part of the former PC’s wealth, which they want shared equally among all siblings.

Through their lawyer, Henry Kenei, they argue that Philip had extensively benefitted from the estate of their father at the expense of other family members.

Kenei said Phillip had taken more than 650 acres of the family land while other siblings got only 200 acres.

“It is in public knowledge that Philip unfairly got a better part of the wealth as compared to others in the family,” said Kenei.

Phillip accused lawyers Kenei and Eric Gumbo of colluding with his step-brothers to falsify documents related to the land in dispute. He wants the lawyers barred from the case.

He claimed the name of his late mother Christine, was crudely deleted and fraudulently altered so that the title deed of the disputed 1,400 acres reads in the name Charles Changwony Murgor.

“Eric Gumbo and Henry Kenei of Kenei of Gumbo & Associates acted in violation of their duty to the administration of justice by engaging in a conspiracy together with George Murgor to defraud the estate of my late mother Christine Chebor,” said Philip.

The two however dismissed Phillip’s claims as false.

Philip wants the matter probed by the Law Society of Kenya.

Justice Sewe said she will make a ruling on the matter on November 30.