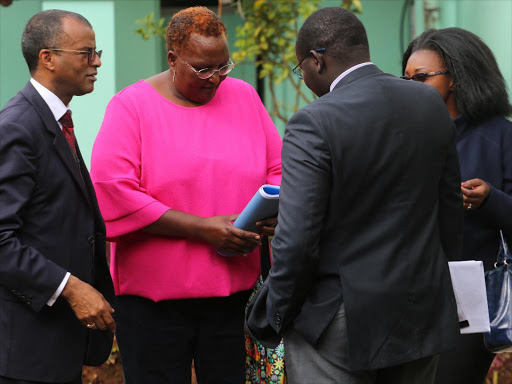 Thirty-four children of former Rift Valley politician William Murgor are battling in court over his vast estate valued at more than Sh2 billion.
The estate includes large tracts of

agricultural land and commercial plots in Uasin Gishu and Elgeyo Marakwet.
Murgor served as MP for Kerio Central during the Kanu regime and died on September 28, 2006. He left behind five widows, one of whom is deceased, and 34 children. Keiyo North MP James Murgor is the eldest son and head of the family.
One of the daughters, Enid Cheptanui, who lives in the US, has moved to the High Court in Eldoret where she has sued the MP, his brother Francis and sister Chemutai over alleged mismanagement, biased administration and sharing out of the estate.
She filed suit through lawyer Phillip Murgor. She testified in court for most of Tuesday before she flew back to the US. The matter is being heard by Justice Hellen Omondi.
Cheptanui filed suit after the three swore an affidavit, seeking letters of administration intestate to manage the estate.
“The affidavit sworn by the three is fraudulent, defective and does not disclose material facts leading to a monumental dispute within the family between those who have been favoured and those who have been disadvantaged or completely left out in the proposed distribution of the estate,” lawyer Murgor says.
Cheptanui is backed by 11 sisters and two brothers. Murgor says her client sought an out-of-court settlement, but the MP and two siblings refused to call an all inclusive family meeting to resolve the dispute.
In her affidavit, she says distribution of the estate violates the Law of Succession Act, is inequitable and unfairly favours children of one widow, Rosa Kimoi.

She says the MP is massively favoured.
“The proposed distribution has totally denied daughters of the deceased their fair and equitable or equal inheritance,” Cheptanui says.
She also argues that the proposed distribution of the estate totally disinherits the surviving widows.
“The proposed distribution also disregards Keiyo Customary Law in cases of polygamy, for equal or equitable distribution according to households, and imports redundant gender discriminative aspects of the same customary law that are illegal and repugnant to justice and morality,” Cheptanui says.
Asked whether she would choose customary law or what is right and legal, Cheptanui, who was in court with her sisters and some brothers, said what is right and legal.
She says two brothers — Ambrose and Oscar — have been left out and the MP, his sister Florence and brother Francis colluded to meddle with Plot No Eldoret Municipality Block 4/84 to benefit themselves to the detriment of others.
Cheptanui has disowned minutes of an alleged family meeting, where proposed distribution of the state was discussed. She says some members were deliberately excluded.