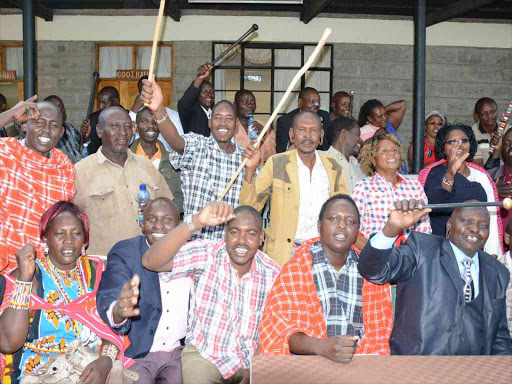 Members of the Maasai community and leaders from Nakuru County in a show of solidarity for the upcoming 260mw geothermal project in Olkaria Naivasha on February 3,2017./GEORGE MURAGE

Maasai elders, who for two months have opposed KenGen’s multibillion-shilling geothermal projects in and around Olkaria in Naivasha, now support them.

After many demonstrations and finger-pointing, the elders have backed the Stakeholders’ Coordination Committee that will oversee the work.

Last week, the elders said they will end the differences between two rival groups over control of the committee.Their spokesman Lila ole Mututwa said the committee in charge of the new 260MW geothermal project has the interests of the community at heart.

“We all agree that Kengen has assisted the Maasai community in Olkaria and Suswa through various projects and it is unfair to block something which has personal benefits,” he said.

Mututwa said the unending feuds are delaying the project, yet the community is now fully behind it.

“As elders from this area and who know how such projects benefit the community, we have resolved to support the project and the committee to carry out its work without further delay,” he said.

Mututwa, a former Narok councillor, said the community is satisfied with its representation in the committee. “Members have the elders’ blessings and the community at large so they should work for the best interests of all of us,” he said.

Mututwa, who was with several elders, was speaking to the press after a meeting at the Berlin Guest Lodge in Naivasha. Elder John ole Ngamisile said the community is fully behind the project, which will transform the area and create jobs for the youth.