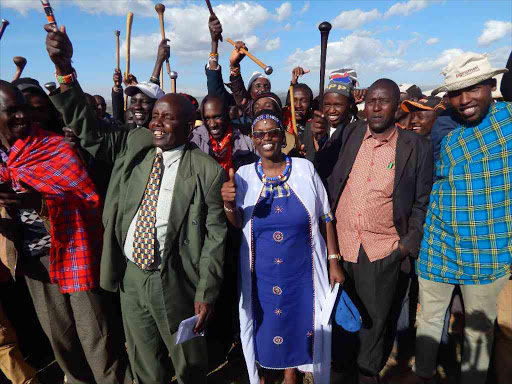 Leaders met at Rotian, Narok North constituency, on Wednesday, and gave her the blessing to run run on the Jubilee Party ticket.

“As the community and Masikonte family, we settled on Lydia and we will do everything possible to ensure that she wins the nomination and eventually [in the] general election,” Rotian councillor Nkuruna ole Masikonte said.

He dismissed the candidature of nominated MCA Naanyu Masikonde, who comes from the same family and has declared her interest in the seat.

“The MCA wants to spoil the party for Lydia and as the family, we will not allow that because we have already made our decisions,” Masikonte said.

“I am ready to transform this cosmopolitan county, if given the mandate. I promised to prioritize consolidation and mobilization of resources and enhance resource allocation to ensure equity to all.”

Lydia joined politics in 2008, when she was nominated by ODM to the now-defunct Narok County Council. She shot to the limelight when she beat men councillors to become chairperson of the then powerful Audit Committee.