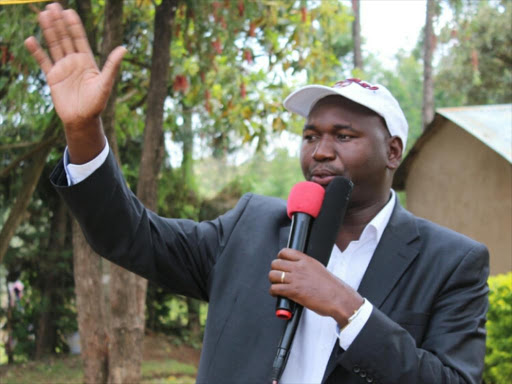 Prof Bitok lost to Mandago in 2013 and wants residents to give him a chance.

“Last time you gave me votes, although they were not enough. Thank you. The votes you gave me made President Uhuru Kenyatta give me a job as an ambassador. Next year, I hope you will not let me down,” he said.

He was there to tell youths about his Ambassador Bitok Foundation, which sponsors needy secondary and university students.

Bitok said he is concentrating on his work as ambassador but will return to run for governor.

He called for peaceful campaigns. “Tribe should not be an issue as we head into the elections period,” Bitok said. He said if elected, he would ensure all resources are well and fairly used.

His entry complicates the competition for the governor’s office in Uasin Gishu, which had appeared to be a two-horse race between Mandago and Nandi county Health chief officer Edward Serem.

All the three aspirants are allied to Deputy President William Ruto and they will competing for the Jubilee Party ticket. “I will work with all communities in the county,” Serem said.

Mandago has also declared he will defend his seat through Jubilee. He says he expects to be re-elected since his administration has performed well.

The governor has told his rivals to stop spreading lies about his performance.

Mandago said he has not sidelined any part of the county or community, as claimed by some people seeking to occupy his office.

“Those who want positions should sell their manifestos based on the truth. Cheap propaganda will not help them,” he said.

Mandago said his rivals have been rubbishing his government’s track record in the past four years.

“We’ve been distributing resources equally to all the six subcounties without favouritism. Those claiming otherwise should better look for other reasons to campaign,” the governor said. He spoke at Kipsomba ward on Wednesday.

The race is expected to be more competitive among the three aspirants.

The Jubilee Party says it won’t give direct nominations or free tickets.

Ruto’s influence could play a role in determining who wins.

Post a comment
WATCH: The latest videos from the Star
by MATHEWS NDANYI @ndanyi_mathews
Rift Valley
15 October 2016 - 03:00
Read The E-Paper