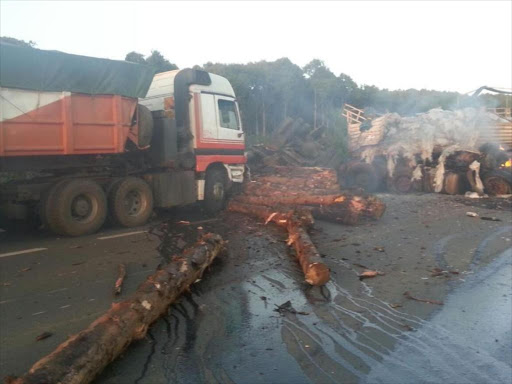 Spilled cargo of timber from one of the trucks that was involved in a crash along the Nairobi - Nakuru Highway. Photo/FILE

A Kenya Forest Service campaign to appraise saw millers is likely to increase the cost of timber by more than 30 per cent. The prices were stabilised since the logging ban was lifted more than 10 years ago.

The operation, which has sparked protests from several timber manufacturers, is aimed at getting rid of briefcase saw millers.

In the new rules by KFS, saw millers licensed to cut trees in gazetted forests must use the Wood Mizer machine as opposed to ordinary saws. KFS says the new machine produces more timber from a log than ordinary ones.

The saw millers are also required to have a fully operational sawmill established in a property that the timber merchant either owns or has leased.

For three weeks, KFS officials have been threatening to revoke the licenses of sawmillers who have not complied with the new rules.

The campaign has sparked protests from sawmillers, who say KFS did not notify them. Only members of the Timber Manufacturers Association – an umbrella organisation for sawmillers - had the information.