Alcohol abuse is up 30% in North Rift 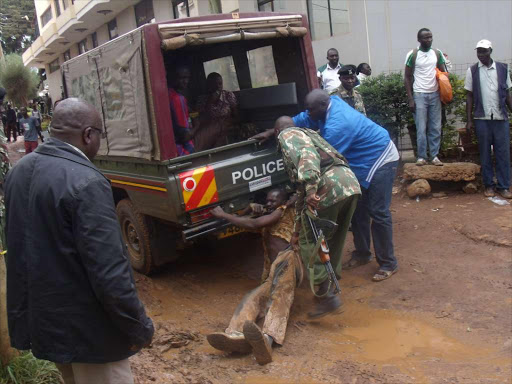 Booze is back: Security officers during a crackdown on illicit alcohol in Eldoret town in October last year. Alcohol use dropped 70 per cent after the crackdown.

CONSUMPTION of alcohol has gone up by more than 30 per cent in North Rift counties after government officials relaxed the campaign to wipe out illicit liquor.

A report by security officials indicates the problem is more serious in slums in Eldoret and Kitale towns.

The report states bar operators are defying the Mututho laws and opening as early as 11am, as well as selling alcohol to youth.

Bars are supposed to operate from 5pm to 11pm.

The National Agency for Control of Alcohol and Drugs Abuse yesterday met stakeholders in Eldoret town.

Uasin Gishu county commissioner Abdi Hassan said chiefs and other government officials will be held responsible for the return of alcoholism.

“We have facilitated chiefs with motorcycles and cash and they should not give us excuses for failure,” he said.

Counties where the problem has recurred include Uasin Gishu, Nandi, Trans Nzoia and Elgeyo Marakwet.

The counties recorded a 70 per cent drop in consumption of illicit alcohol last year after Uhuru ordered the crackdown.

Some county officials blame police and enforcement teams for being asleep on the job.

Meanwhile, more than 1,000 bars in Eldoret and other centres in Uasin Gishu have been inspected before licensing.