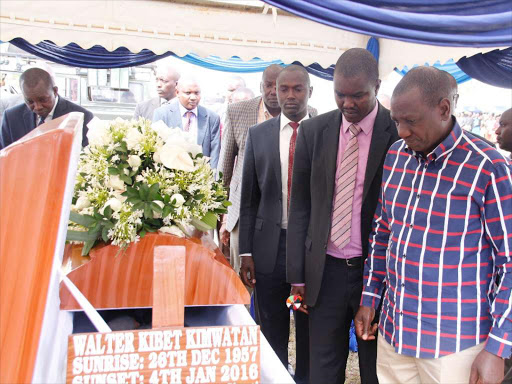 DP William Ruto, Govermor Jackson Mandago and Senator Isaac Melly view the body of the late Walter Kimwatan during his burial at Kuinet in Uasin Gishu County on Saturday.Photo/Mathews Ndanyi

Deputy President William Ruto has asked his critics to stop being envious of his generosity and pledged to continue giving harambee contributions, especially to churches.

He said he will give even more, despite the “noise” being made by those questioning the source of his money.

“Don’t mind those questioning my generosity in helping to build churches.Those are the people who don’t believe in giving and need to be ignored,” Ruto said.

He was speaking at Kuinet in Uasin Gishu county on Saturday during the burial of Walter Kimwatan, a businessman in Eldoret town.

Ruto urged Kenyans to remain peaceful as the country heads to next year’s general election.

“We will attain greater and quick development if we maintain peace and unity,” he said.

“Kimwatan is the best example each one of us needs to emulate if we have to succeed as a nation. We have to be generous and help others in need like he did,” the DP said.

Ruto said leaders, regardless of their political affiliations, must put the interest of the country first and avoid retrogressive or divisive politics.

The leaders present said they fully support the DP’s efforts to unite the country through forums with citizens from all counties.

Post a comment
WATCH: The latest videos from the Star
by MATHEWS NDANYI
Rift Valley
11 January 2016 - 05:00
Read The E-Paper