No casualties were reported during the Tuesday morning fire

• Kisumu Senator Tom Ojienda has however donated iron sheets to traders who are counting losses. 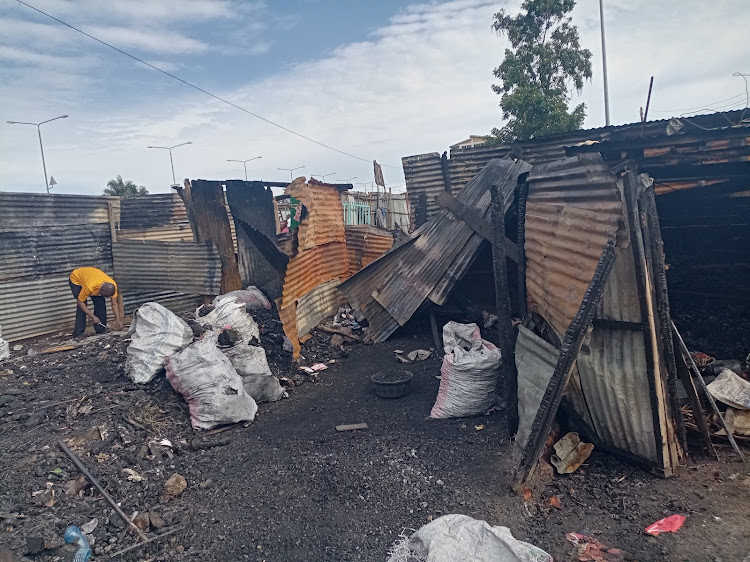 RAZED DOWN: One of the traders at Nyamasaria market after fire razed down their property worth millions on Tuesday, November 22.
Image: MAURICE ALAL

Property worth millions was destroyed during a fire incident at Nyamasaria market, Kisumu on Tuesday morning.

No casualty was reported during the early morning fire inferno whose cause still remains unknown.

Kisumu Senator Tom Ojienda has however donated iron sheets to traders who are counting losses.

He empathised with the traders and called for a joint effort to support them.

The iron sheets will help the traders at Nyamasaria market to reconstruct new stalls. Ojienda also donated cash to the affected traders.

Kisumu county senate office manager Simon Peter on Tuesday presented the more than Sh100,000 donations to the traders on behalf of Ojienda.

Peter assured that the senator would provide linkages geared towards promoting small scale traders in the county.

“We know our office is limited in terms of funds but we will do what it takes to provide our traders with financial opportunities through partnerships,” he said.

The manager said the senator’s office is ready and willing to swiftly respond in case of calamities in the county.

Ojienda, he said, has called on the county government to financially support the affected traders.

The senator also appealed to other elected leaders and the private sector to help the traders start up business.

“The livelihoods of these traders have been destroyed. They need to be helped back on their feet,”Ojienda said. 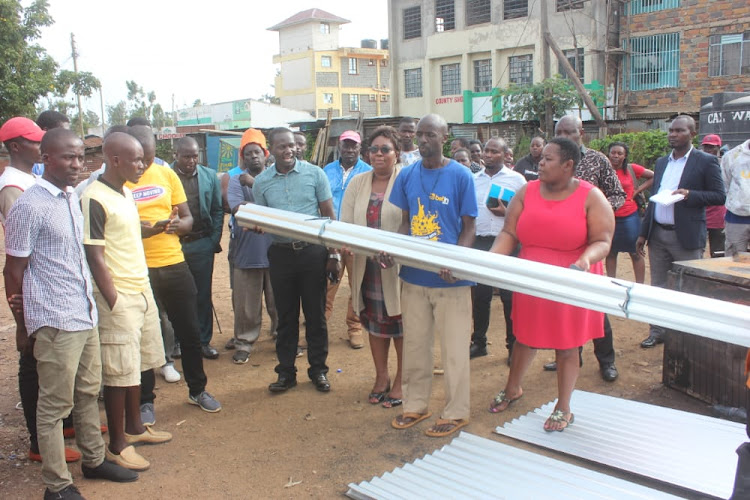 Some traders suspect the cause of the fire to be an electrical fault while others believe it could have started from the nearby charcoal vendor's shop.

Nancy Adhiambo, who deals in cosmetics, said she lost goods amounting to about Sh2 million.

“I don’t even know how to start because I had just brought in more stock. I had two shops and I have a loan that I am paying,” she said.

Adhiambo called for support from the national and county government, and well-wishers to help them start up.

“The fire started at about 4am on Tuesday. It is so unfortunate since we were at our homes and when we came to the market in the morning, we could not salvage anything,” she said.

Muchana said the fire reportedly started from the barber shop, according to a security guard who informed them of the fire outbreak.

He had restocked his shop, expecting to reap big and clear a loan he took to finance the business, only for the fire to strike.

“We are counting huge losses here. We are appealing to the county government to intervene and assist us,” Muchana said.

Trader and stall owner, Charles Momanyi said his savings and livelihoods have gone up in flames.

“We are appealing for help from the relevant authority. We are now jobless. We do not know what to do next,” he said.

Momanyi owns nine stalls, which were all razed down.

The traders lauded Ojienda for visiting and supporting them during the misfortune.

Traders and residents who lost property have accused the county administration of negligence.
Counties
3 months ago

Say politicians and well wishers should stop channelling any assistance through them.
Counties
5 months ago