Manhunt for three suspects who dumped a body in culvert 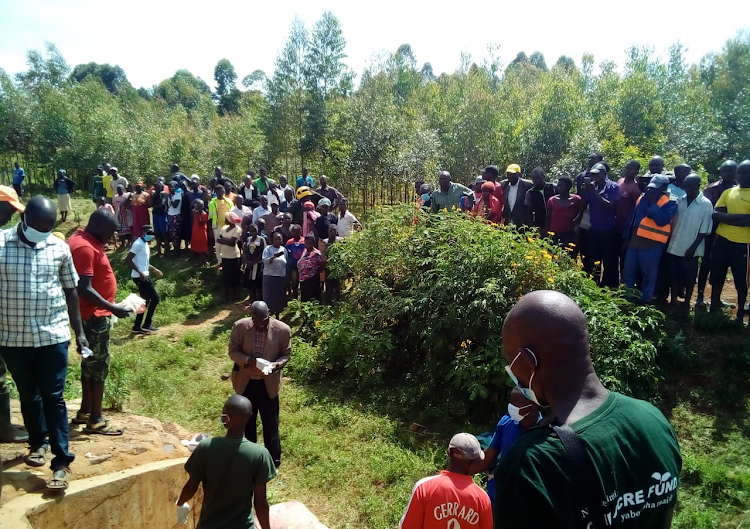 MURDERED: Residents and security officers at the place where a body was found in Kabondo Kasipul on Wednesday, January 25.
Image: ROBERT OMOLLO

Police have launched a manhunt for three suspects who dumped a body in a culvert at Nyapalo village along the Oyugis-Kisumu road.

A resident saw the men in a Probox before they fled at 5.30am on Wednesday.

The body was later discovered by two children who were looking after cattle following a bad smell near the place.

It was stuffed in a sack and stashed in the culvert.

The children raised an alarm before members of the public came to witness.

Villagers who visited the scene said they believe the deceased was murdered elsewhere before his body was dumped at the place.

Othoro police station Joseph Wasua said that their preliminary investigations revealed that the man was murdered before his body dumped under the culvert.

He said they are looking for three people who were seen at wee hours with a Probox near the place.

The body was taken to Rachuonyo South subcounty hospital mortuary for post mortem as police continue with investigations.

Residents however, expressed concern over escalating cases of insecurity in the area and asked security agencies to help them arrest the situation.

Cases of house break-ins and attacks have been reported in the recent past. Two weeks ago, a body of a man was found dumped in river Miriu.

Police however, asked residents to collaborate with security officers to address cases of insecurity.

“Let residents report to us the whereabouts of the suspects to aide their arrest. We want our people to cooperate so we can address insecurity challenges,” Wasua said.

Kimulwo said the car was seized as it was being driven within Eldoret.
News
2 weeks ago
Post a comment
WATCH: The latest videos from the Star
by ROBERT OMOLLO
Nyanza
25 January 2023 - 12:57
Read The E-Paper