Orengo spent Sh20m on taskforce to reveal the obvious - lobby 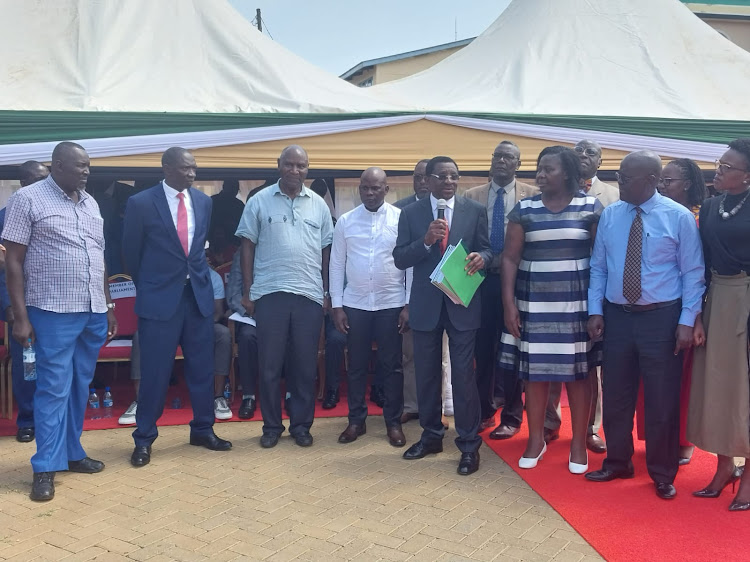 Governor James Orengo and Edward Ouko with other county dignitaries when he received the report last Friday
Image: JOSIAH ODANGA

A lobby group has faulted Siaya Governor James Orengo for spending Sh20 million on a task force to “table the obvious.”

The Operation Linda Ugatuzi leader Prof Fred Ogola told the Star that the task force was supposed to name the culprits instead it just stated that millions of money were stolen.

“Is there any finding that Ouko’s report has revealed that we could not tell? How much has it cost the people of Siaya to do this report?” Ogola paused.

In October 2022, Orengo constituted an audit team to look into the financial, human resource and governance systems of the devolved unit.

The task force was led by retired Auditor General FCPA Edward Ouko and it delivered its finding last Friday.

The Ouko-led audit committee noted that the lack of internal controls of the financial system made the finances of the county government susceptible to plunder by unscrupulous; and consequential loss.

The team has since recommended that the Ethics and Anti-Corruption Commission and the Directorate of Criminal Investigations should investigate the matter of alleged embezzlement of funds.

The task force wants the EACC and DCI to finish their investigations into the alleged embezzlement of public money totaling to Sh1 billion, and apportion culpability as appropriate.

But Prof Ogola argues the office in place should first hold the culprits to account.

“The people of Siaya were expecting to know who stole their money but the task force is not mentioning the thieves,” he said.

Ogola, who hails from Jera in the Ugenya constituency opines that the report is too weak and has no impact.

“On a scale of 1-10, I give the report a 2. The quality of that taskforce report cannot even generate the interest of the EACC," the don said.

He alleged that “all cases die at investigation level; not at prosecution and the Directorate of Public Prosecutions will drop the case for lack of enough evidence."

The report is good for intellectual purposes but holds no culprit to account, he said.

In a typical example of doomsaying, Ogola wants the people of Siaya to brace themselves for another 10 years of failed devolution.

“Let the people of Siaya brace themselves for ‘Rasanga 2’ in the name of Governor Orengo," he said.

Prof Ogola claimed that the task force knows the names of the culprits but chose to withhold them because they are 'big people' who call the shots in Siaya.

The Star attempts to reach the speaker on phone for clarification on the issue were futile as he had not responded to the messages by the time of going to press.

This is even as the county leadership continues to raise concerns over ballooning wage bill.
News
1 week ago
Post a comment
WATCH: The latest videos from the Star
by JOSIAH ODANGA
Nyanza
23 January 2023 - 14:13
Read The E-Paper