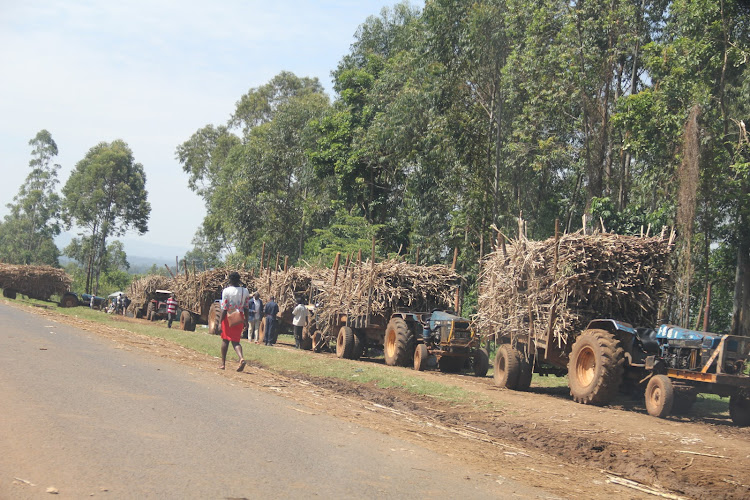 Some trucks loaded with sugarcane in Ndhiwa
Image: ROBERT OMOLLO

Two men died on the spot after a tractor they were using to ferry sugarcane overturned and fell on them in Ndhiwa.

They died on Tuesday night.

The two are among those who were hired to cut and load cane into the tractor.

Reports indicate that the incident occurred when the driver lost control of the tractor before it overturned and killed the two men.

They were seated on top of the mudguard of the rear wheels of the tractor.

Resident Lawrence Omoro said the accident must have been caused due to lack of adequate headlights.

He said most drivers failed to comply with traffic rules as some operate their vehicles when drunk.

“Most trailers operating in Ndhiwa don’t have reflectors making it difficult for motorists to see them at night. We’re also asking workers to comply with traffic rules,” Omoro said.

However preliminary investigations revealed that the driver was speeding before losing control of the vehicle.

The police officer said they are conducting thorough investigations because similar accidents involving tractors have been reported on most roads within Ndhiwa.

Their bodies were moved to Manyatta mortuary.

He said some drivers are not qualified.

“We have raised issues with the police to bring sanity on the road by not allowing people not qualified to operate,” Lentana said.

The MCA said they want police to ban and suspend ferrying of cane at night. The bus was carrying mourners from Uganda to Mathare.
InPictures
3 weeks ago

Four dead after matatu rams into cane trailer in Kakamega

The driver of the matatu lost control of the vehicle and veered off the road, ramming the stationary trailer from behind.
News - Page 7
3 weeks ago

Ten others were seriously injured after a matatu rammed into a cane trailer at Musembe.
News
3 weeks ago
Post a comment
WATCH: The latest videos from the Star
by ROBERT OMOLLO
Nyanza
18 January 2023 - 12:57
Read The E-Paper