Said Deputy President Rigathi Gachagua will preside over the event on Monday.

• Nyong’o, who took over from Embu governor Cecily Mbarire as the new Patron of Kicosca games, said preparations are almost coming to an end.

• Nyong’o appealed to the media to give the event strong coverage and show the world Kisumu can offer as an investment destination. 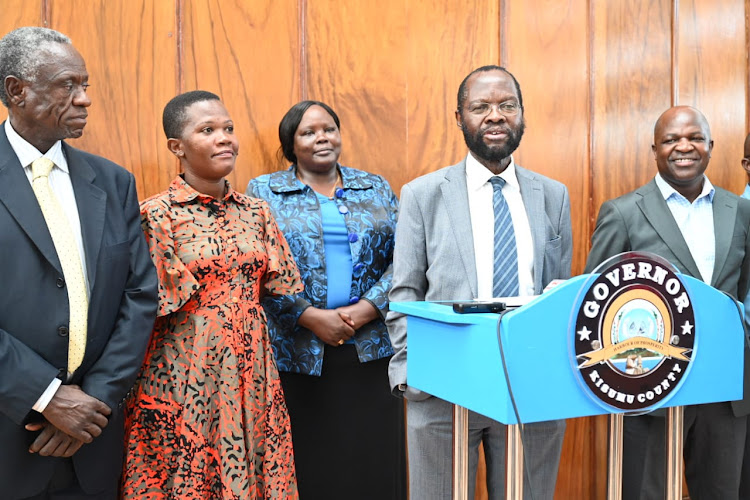 Kisumu governor Anyang Nyong’o has assured that the county is ready and well prepared to host Kenya Inter-Counties Sports and Cultural Association (Kicosca).

He said Deputy President Rigathi Gachagua will preside over the event in Kisumu on Monday.

Nyong’o, who took over from Embu governor Cecily Mbarire as the new Patron of the Kicosca games, said preparations are almost coming to an end.

More than 8,000 visitors are expected to attend the event.

“They have assured me that security arrangements are complete. We want to assure the participants who will be here for the next seven days that they will be very safe in Kisumu,” he said.

“Kisumu is a lovely, beautiful city of very friendly people. Furthermore, we love and cherish sports, having produced hundreds of award-winning sports talents and cultural ambassadors."

He said the games will be held in 13 venues and all have been prepared.

“With close consultation with the National Executive Committee and the competing counties, we have identified, booked and prepared various hotels and learning institutions that will accommodate the delegates,” he said.

He said schools and colleges have allowed the county government to use their halls of residence because students are currently on long holidays.

"Besides venues, the accommodation facilities have been inspected and fumigated by the department of Public Health."

Nyong’o said the event will boost the economy not only for Kisumu but across the neighbouring counties.

“I want to appeal to small and medium-scale traders to seize this opportunity to provide services to the guests in an organised manner,” he said.

The Kicosca National Executive Committee on Thursday started crucial final leg meetings with the County officials during which the fixtures for various categories will be issued.

Nyong’o appealed to the media to give the event strong coverage and show the world Kisumu can offer as an investment destination.

He added that the Kicosca plays a very important role in the calendar of the devolved units besides the devolution conference.

Kicosca was founded in 2013 at the onset of Devolution.  It metamorphosed from the old association, previously known as the Kenya Inter-Municipalities Sports and Cultural Association- KIMSCA.

Nyong’o said the games are primarily to give an opportunity to employees from the 47 county governments to exhibit their sporting talents and to interact and learn from each other’s cultural orientations.

It also enables the staff to benchmark and has a health break to help drive productivity.

Since its inception, Kicosca games have been hosted in Nairobi, Nakuru, Uasin Gishu, Kiambu, Machakos, Kisii, Kericho and Embu.

Kisumu was scheduled to host the events last year but was pushed to this year because of other activities that were falling at almost the same time.

Over 8,000 guest and participants are expected to grace the occasion.
Counties
2 weeks ago

The President will be launching various projects
News
2 weeks ago
Post a comment
WATCH: The latest videos from the Star
by MAURICE ALAL Correspondent, Nyanza Region
Nyanza
13 January 2023 - 16:32
Read The E-Paper