The other boy was also electrocuted when he tried to rescue his brother who was stuck. Some police officers with residents at the scene where two children were electrocuted in Rota, Ndhiwa on December1,2022
Image: ROBERT OMOLLO

Two brothers have died after they were electrocuted at Rota village in Upper Kayambo sublocation in Ndhiwa constituency.

The boys aged 12 and 9 were Grade three and PP2 pupils at Rota Primary School respectively.

Area assistant chief Thomas Siengo said the minors were electrocuted when they were tethering cattle to graze at a field near their home.

They died on Thursday morning.

The incident occurred when one of the boys touched a hanging live wire on an electricty pole that was recently connected to their neighbouring home.

Connectivity was completed three days ago.

The other boy was also electrocuted when he tried to rescue his brother who was stuck on the power cable.

“The young boy touched a wire that was hanging loosely without knowing it was live. His brother was killed when he went to rescue him,” Siengo said.

Speaking to journalists on the matter, the administrator said they alerted Kenya Power officials and police on the incident.

He urged Kenya Power to rectify the situation to avoid further damage.

“The place has been cordoned to prevent residents from accessing it. The area is now dangerous for locals,” he said.

“The bodies have been taken to Manyata Kobodo mortuary pending investigations." 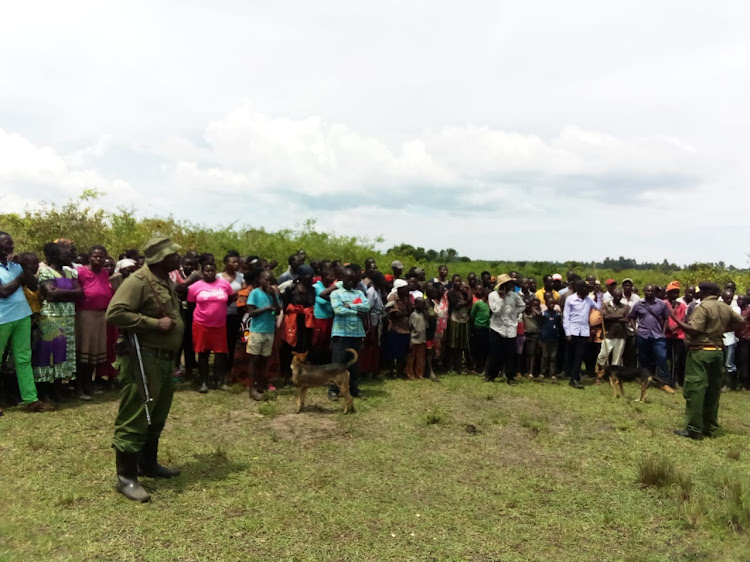 Residents with police officers at the scene of incident in Rota, Ndhiwa constituency on December 1,2022
Image: ROBERT OMOLLO

Minor crushed to death after falling off a lorry in Nairobi

Mason falls to death at construction site in Kilimani

Police say at least two workers die in similar accidents in a week in Nairobi alone.
News
2 months ago
Post a comment
WATCH: The latest videos from the Star
by ROBERT OMOLLO
Nyanza
01 December 2022 - 16:44
Read The E-Paper