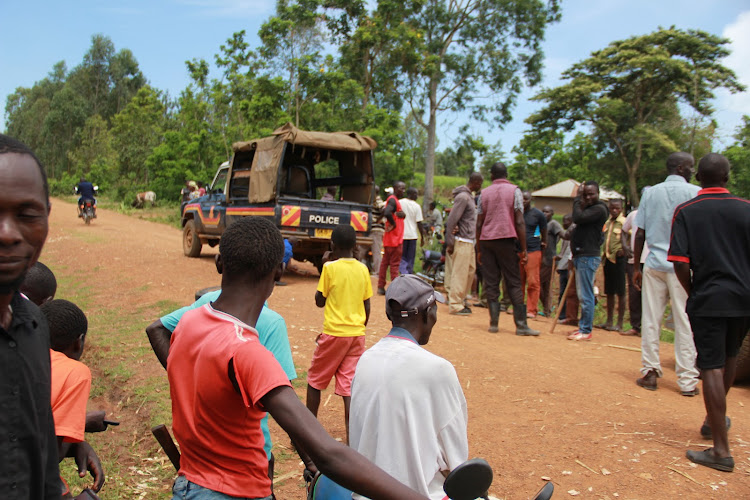 Residents near police car which carried the body to a mortuary in Homa Bay
Image: ROBERT OMOLLO

Fredrick Ondenyo’s body was found floating on the water after missing for three days.

His family reported that Ondeyo complained of headache before disappearing last Saturday.

“The matter was reported at Lwanda police post and a search was ongoing before the body was found floating in the water pan,” Sirawa said.

A statement recorded at the police indicated that the deceased’s family had reported that Ondenyo went missing.

The family had tried looking for him before they decided to report the matter to police.

Sirawa said the body was spotted floating at the water pan by some children who had gone to fetch water, before they alerted some villagers.

According to the administrator, the body had started decomposing. He asked the family to be calm as police continue with investigations to establish the possible cause of death.

“We still treat the incident as a drowning case but we’re carrying out investigations to establish what exactly killed him,” Sirawa said.

The body was taken to Homa Bay Teaching and Referral Hospital mortuary for postmortem.

Residents urged relevant authorities to fence the pan to minimise accidents in future.

They expressed fears that the pan could be turned into a dumping site for dead bodies.

The pan was initially fenced but some unknown people pulled it down without clear reason.

Neighbours said a commotion and screams were heard from their house on Saturday.
News
5 days ago

Man shot dead after withdrawing Sh300,000 for dowry in Kiambu

He had withdrawn the money at Limuru before travelling back to Ndeiya.
News
1 week ago
Post a comment
WATCH: The latest videos from the Star
by ROBERT OMOLLO
Nyanza
23 November 2022 - 13:55
Read The E-Paper