The current salaries, she said, can't make them discharge their duties effectively.

• They asked those accusing Ward Reps of greed to look at the push for better remuneration in the context of the rigors of their work as opposed to raw greed for more in life.

• The current salaries, they said are very low to make them discharge their duties effectively. 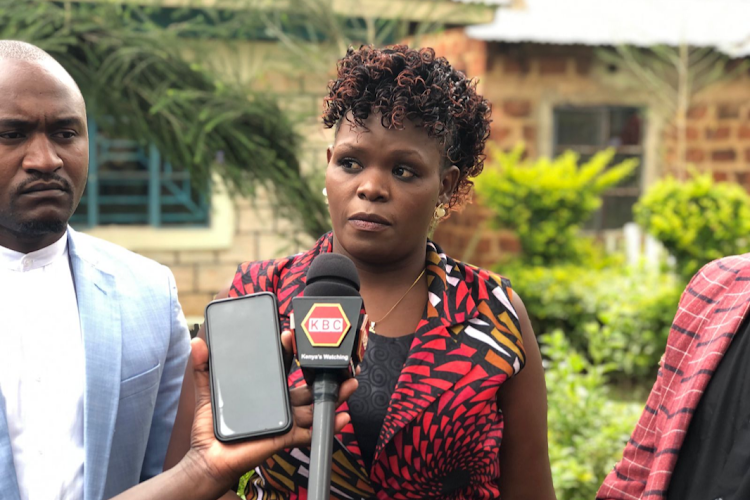 Dolphin Bwari flanked by other MCAs during a media briefing on Saturday
Image: Magati Obebo

Kisii Assembly Ward Reps on Saturday vehemently defended the call for increased pay saying the push is not laced with any greed but the need to improve service delivery.

They asked those accusing Ward Reps of greed to look at the push for better remuneration in the context of the rigors of their work as opposed to raw greed for more in life.

"There is absolutely no greed in this, for those who say it is greed they don't know what we are going through on a daily basis," said Dolphin Bwari, Nyanza Cluster Representative in the County Assembly Forum.

The current salaries, she said are very low to make them discharge their duties effectively.

"It was actually slashed down to Sh86,000, a significantly low amount compared to the work before them. The low pay compromises their work including that of oversight," said Bwari.

The Ward Reps questioned how an MCA who earns peanuts can oversee a governor who earns over a million.

"This is among the reasons we need to re-engage the Salaries and Remunerations Commission to spare us the constant knee-jerk drama about salaries and do something about our plight, a 40 percent hike isn't a bad push for us" added Bwari.

They were speaking at Gesusu SDA church in Masaba South after a Sabbath service.

They further queried the rationale of Kenya Revenue Authority taxing their car grants.

"This all is adding salt to a fresh wound. Everything is done so insensitively and that is why we need to sit down and talk with all these agencies," Bwari told journalists.

They also asked the salary agency to adjust the car size recommended for them to help ably navigate the bad roads in the villages.

"We look to SRC, KRA, the National Assembly and the Senate with desperation for help otherwise we are not going to do much in our role which is a pity " she stated

Onkoba, on his part, vehemently pushed for the Ward Development Fund which can aid in undertaking projects at the grassroots.

Currently, he said, the MCAs are under the mercy of the governor who can decide to sabotage any of them at will especially if they are not dancing to the tune.

He implored MPs to pass the bill when it shall be brought before the House.

Onkundi who hosted them said so many projects would be stalling every other term if they will not be allowed to have their way on the Ward Development Kitty.

At least five bars were ordered to close after a sting crackdown on Tuesday morning.
News
4 weeks ago
Post a comment
WATCH: The latest videos from the Star
by MAGATI OBEBO Correspondent, Kisii
Nyanza
14 November 2022 - 20:03
Read The E-Paper