•The former MCA promised to lead the county assembly and that he will not antagonize the executive as they undertake their oversight role.

•Ahead of the August 9 elections, Gaya did not defend his seat but joined the campaign team of Governor Wanga and her deputy Oyugi Magwanga. 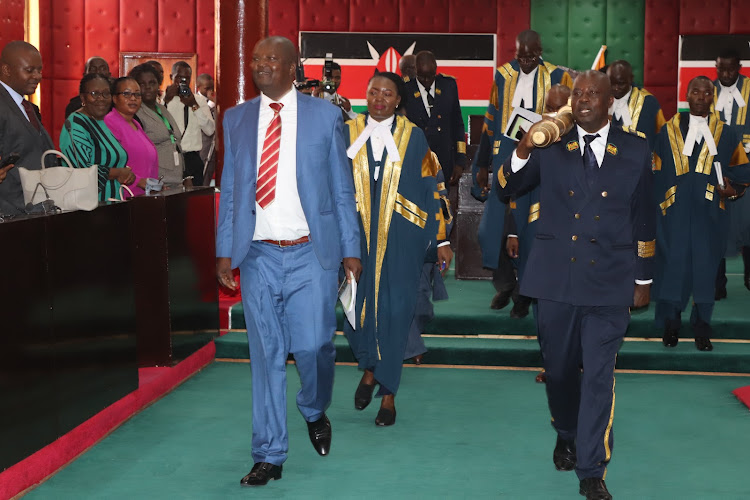 Homa Bay MCAs have elected former Central Karachuonyo MCA Julius Gaya as the speaker of the county assembly in the round one voting exercise.

Of the 54 MCAs who cast their ballots after being sworn in, 40 members voted in support of Gaya while 14 stood with Marieba.

Interestingly, ODM's Samuel Oking of Rusinga ward who competed against Samuel Obwana for the deputy speaker position got the same number of votes as Gaya

Obwana who was elected as independent in the Homa Bay West ward got 14 votes as Marieba.

The August elections saw ODM win 32 seats out of 40 wards.

Eight MCAs got elected on an independent ticket. Fourteen MCAs were nominated.

Speaking after being sworn into the office by the county assembly clerk Faith Apuko on Wednesday, Gaya urged MCAs to get united and refrain from any behaviour that can dent the image of the assembly.

“Homa Bay county assembly must start from a fresh page by working together to achieve its objectives. This will ensure we restore the image of the county assembly,” Gaya said.

He stressed that working in solidarity as members and with the house leadership will ensure service delivery for the residents.

“We must focus on legislation and oversight roles because many people want to get the benefits of devolution,” he said.

The former MCA promised to lead the county assembly and not to antagonize the executive as they undertake their oversight role.

He argued that many residents want service delivery.

“The county assembly shouldn’t and will not be an impediment to the executive in doing their work. We’re all going to be guided by the constitution to ensure executed our mandates effectively,” he added.

Ahead of the August 9 elections, Gaya did not defend his seat but joined the campaign team of Governor Wanga and her deputy Oyugi Magwanga.

Post a comment
WATCH: The latest videos from the Star
by ROBERT OMOLLO
Nyanza
22 September 2022 - 22:09
Read The E-Paper