Says the executive will be checked with decorum and within the law. 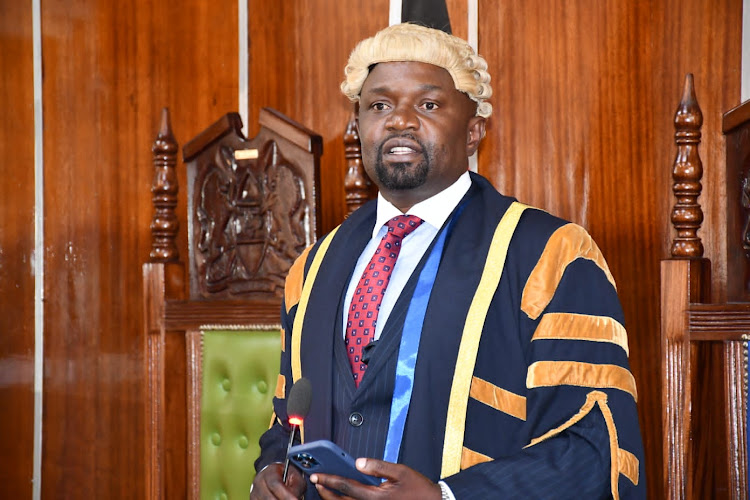 Siaya speaker George Okode moments after he was elected for another term on Tuesday.
Image: DICKENS WASONGA

Siaya speaker George Okode has pledged to use his leadership in the house to keep in check the administration of Governor James Orengo.

Orengo was elected on August 9 to replace former Governor Cornel Rasanga who had served two terms.

Speaking after his election as speaker to serve another five-year term, Okode said he will ensure the assembly sticks to its lane and urged the executive to do the same.

"We will keep to our lane and we urge the executive to keep to their lane as well," he said while giving the first speech upon being declared winner on Tuesday.

The seat attracted 12 individuals but three of them failed to return nomination forms to the assembly clerk as required before voting day.

Seven others were disqualified after MCAs who had been listed as proposers disowned them saying their signatures had been forged by the contestants.

This is the third consecutive term for Speaker Okode who was first elected to the position in 2013 in the first Assembly.

Okode who thanked the MCAs for voting for him, said the county was blessed to have an executive led by a guru in legislation and a parliamentarian of long standing.

"We expect this will be used to synergise our relationship with the executive," he said.

The speaker added that under his watch, the executive will be checked with decorum and within the law.

He emphasised that theirs will be a symbiotic relationship.

Okode said in their interactions with the executive, the interest of the people will be the guiding principle.

"Everything decision we shall make, we will be asking ourselves, are the people happy?"

The speaker further noted that he is aware of the huge task ahead but pledged to serve all of the MCAs equally without any bias to party affiliations.

The house has 26 ODM elected MCAs, one from UDM, another one from Federal Party of Kenya and one independent. It also has 11 nominated members.

He dismissed the notion that an effective assembly is measured by how many impeachment motions against a governor or a member of the executive goes through.

He said he was also aware that many MCAs think that it is how often they go to bed with the executive that they can be assured of being re-elected.

"I am telling you from experience that it doesn't matter how many times you impeach a governor or a CEC or how often you sleep with the executive. It only matters that you have a shared focus for the benefits of the people and respect for the elected leaders together with the executive," he said.

Okode at the same time applauded the leadership of the ODM party for not having meddled on the speaker's election.

He said the party did not tell the MCAs who to elect as speaker or who not to vote for.

The assembly adjourned on Tuesday after the swearing-in of the 40 MCAs and the election of the Speaker.

Okode said it will reconvene on October 11. He said within the break, members will have been trained and equipped with skills and information to be able to discharge their mandate.

"The house committees will also be put in place by the time the house reconvene and the assembly leadership elected as per procedure," Okode said.

Odhiambo is one of the many leaders who turned up for orientation on Monday.
Counties
1 week ago

A petition sought to disqualify Okode on grounds that he did not resign six months before election.
News
1 week ago

Clerks in respective counties have already advertised for vacancies in office of the speakers.
News
1 week ago
Post a comment
WATCH: The latest videos from the Star
by DICKENS WASONGA
Nyanza
21 September 2022 - 22:00
Read The E-Paper