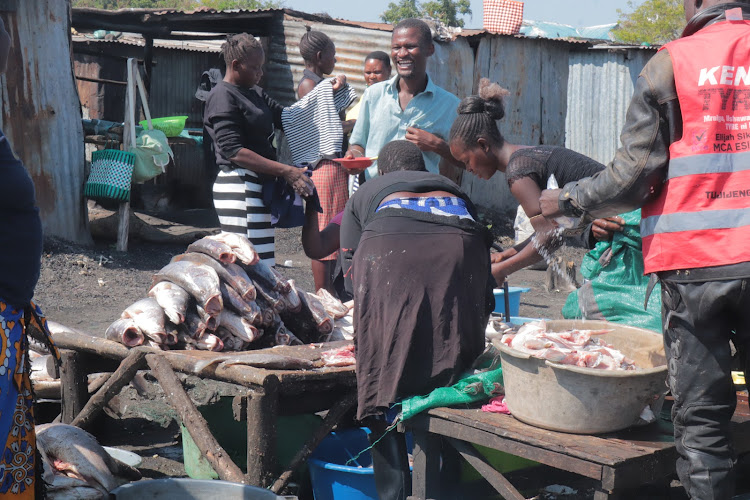 Traders at Homa Bay pier market want the county government to clean the facility to enable them operate in a conducive environment.

The fish traders said the general sanitation of the market, which is adjacent to Lake Victoria, is wanting.

The water they use for cleaning fish is fetched directly from the lake.

Traders Elizabeth Otieno and Mary Mbago said the market has become filthy due to poor sanitation.

“Let the county government clean this market and supply us with clean tap water. We’re operating in a non-conducive environment yet we pay taxes,” Otieno said, adding that traders fight for space with marabusta birds and vultures.

The birds scramble for fish and any other waste they can feed on.

The traders said the cleanliness of the market should be addressed by collecting the accumulating garbage and providing water.

Otieno argued that they are also at risk of contracting diseases due to poor sanitation.

“It’s as if we have been neglected by the government. We have been paying taxes hoping for better services but we don’t see any change,” she said.

Ahead of 2017 elections, the National Government Affirmative Action Fund (NGAAF) under the leadership of Gladys Wanga spent Sh8 million to build an integrated fish market at the facility.

Since then, traders have also increased in number and the market is becoming congested and is unable accommodate fish traders.

Some women sell fish from wooden racks at the edge of the lake where all the waste is deposited into the water body.

The sanitary condition of the market is also worrying fish consumers as waste dumped into the lake finds its way into the fish.

“The environment around the market is unhealthy for both traders and the public. Let Wanga intervene,” Otieno said.

On Monday, Mbago said the market used to be cleaned by youths employed under Kazi mtaani programme but they stopped before the last general election.

“The cleaning exercise was suspended ahead of the August 9 elections. The market is dirty and filthy,” Mbago said.

Homa Bay County Public Health officer John Kabaka said they have received the complaints and concern about it.

He said they are working with the county government to address the situation.

He said the water used by traders is sourced directly from the lake and runs back into the lake after use.

There is likelihood of cholera and dysentery outbreak  if appropriate action not taken urgently.

“The matter has not been brought to our attention and we’ll assess the situation before addressing it,” Kabaka said.

They say moving inside the facility denies them customers who prefer buying on the streets.
Counties
2 months ago
Post a comment
WATCH: The latest videos from the Star
by ROBERT OMOLLO
Nyanza
19 September 2022 - 22:00
Read The E-Paper