He will battle it out with former speaker Elisha Oraro and lawyer Sam Onyango on Thursday. 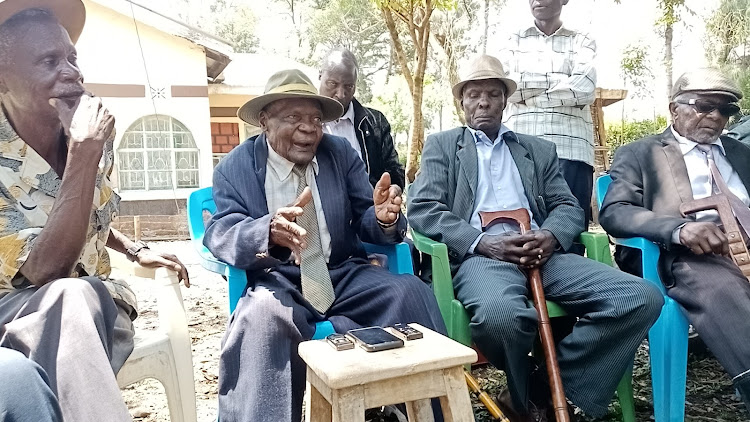 Elders from Muhoroni subcounty led the deputy chairman of Luo Council of Elders in the Kano clan Andericus Miruka Masero during a press briefing in Muhoroni on Saturday.
Image: MAURICE ALAL

The elders drawn from the subclans in Muhoroni subcounty said Nyong’o should ensure their son wins the seat.

Ong’ou will battle it out with former speaker Elisha Oraro and lawyer Sam Onyango during elections on Thursday.

Led by Andericus Miruka Masero, the deputy chairman of Luo Council of Elders in the Kano clan, the elders said Nyong’o should fully support Ong’ou to ensure he clinches the seat.

They thanked the governor for working closely with Ong’ou, who was his campaign chairman, saying he should seize up the matter and bring victory in honour of their son.

Masero pointed out that on many occasions when Nyong’o visited Muhoroni while seeking re-election in the last general election, he assured the elders that he will stand with Ong’ou in his quest to serve the people of Kisumu county.

“When we installed Nyong’o and blessed him for re-election, I personally confronted him with the issue of Ong’ou whom he promised to help after elections,” he said.

Masero said it was high time Nyong’o stood by his promise and helped Ong’ou to become the county’s speaker, noting the role Ong’ou played in his re-election was massive.

“He should not go against the elders’ wish following the pledge he made to us during campaigns. This is the time for him to support our son,” he said.

Speaking to the press on Saturday in Muhoroni, the elders asked the governor to consider the larger Kano clan that has not got any position in his administration.

Masero noted that Nyakach subcounty got deputy governor and Senate positions, with Seme subcounty having bagged the governor seat. Kisumu West subcounty got the woman representative.

Kamagaga subclan council of elders chairman James Osongo reiterated that Ong’ou helped Nyong’o to kill the animal during the hunt and it was prudent that he gets a piece of the meat.

The sentiments were echoed by Kabar council of elders chairman Damianus Jer and Muhoroni ODM chairman Vitalis Okuta, who said Nyong’o has no excuse to not support Ong’ou.

Okuta also challenged the MCAs to exercise wisdom while voting for a speaker who will unite the assembly and help foster the county's economic growth.

"Do not be swayed by money to vote for someone for his own selfish interest but vote for a development-oriented leader," he added.