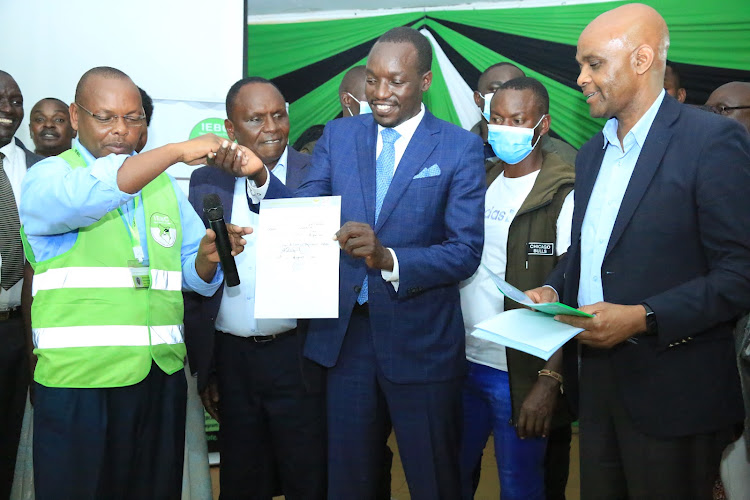 Dozen expectations await the incoming Kisii Governor-elect Simba Arati who will be sworn on Thursday at the Gusii Stadium to succeed Governor James Ongwae.

The residents expect the incoming county chief to implement his manifesto to benefit all people from the 11 subcounties.

His first commitment would be to solve problems facing health workers, who in a number of occasions, have been on strike over salary arrears, illegal dismissal and poor working conditions.

After he was declared winner, Arati assured the health workers that he would ensure they receive their pay and enjoy favourable working conditions.

"I am going to take upon the issue of  the health workers' plight immediately I will be sworn in as the second governor," the outgoing Dagoretti MP said.

"I am going to also ensure  that  health facilities have enough drugs for our patients."

Arati is expected to ensure that the multi-million shilling 200-bed capacity of mother-to-child wing built by the county in collaboration with the national government and development partners at Kisii Teaching and Referral Hospital, is finished, staffed, equipped and begins operations.

He is also expected to ensure the banana processing factory, commissioned by former Defence Cabinet Secretary Eugene Wamalwa, gets an investor to run it.

It is anticipated that when the factory starts operations, it will not only cushion farmers from exploitation by middlemen, but create jobs for massive unemployed youths.

The Sh158 million factory at the Agricultural Training Centre was co-funded by the European Union, the county and national governments under Instruments for Devolution Advice and Support programme.

In order for the factory to have enough bananas for processing, the county, under Arati's administration, will equally be expected to encourage farmers to boost production to enable their products attract local and foreign markets.

“The devolved unit can look for a market for banana flour at United Nations Children Fund hospitals, schools to improve nutrition for patients and children,” Wamalwa said during the commissioning of the plant.

The governor will also face the challenge of finding land for a dumpsite to help control the garbage menace.

Residents in Bonchari and Kitutu Chache South constituncies where land was identified for the dumpsite have since opposed a proposal by Ongwae's administration to have it located to either one of the areas.

Arati says the past belongs in the past and he is determined to unite the county and forge forward.
Counties
3 months ago

These politicians followed dreams of leading in higher capacities than they did in the city.
News
3 months ago

Mixed fortunes for politicians who switched camps before polls

Some of those who lost their bid to become Kisii senator include Maangi and Magara.
Counties
3 months ago
Post a comment
WATCH: The latest videos from the Star
by BENSON NYAGESIBA Correspondent
Nyanza
24 August 2022 - 22:00
Read The E-Paper