Last-minute boost for Pesa after speaker drops out

• Migori has 378 candidates for five elective posts across 40 wards and eight constituencies. It has 469,053 voters, including 34 in prisons.

• Both Okoth and Pesa hail from Nyatike constituency and the former speaker has not been on the campaign trail because of court cases and illness, he said. 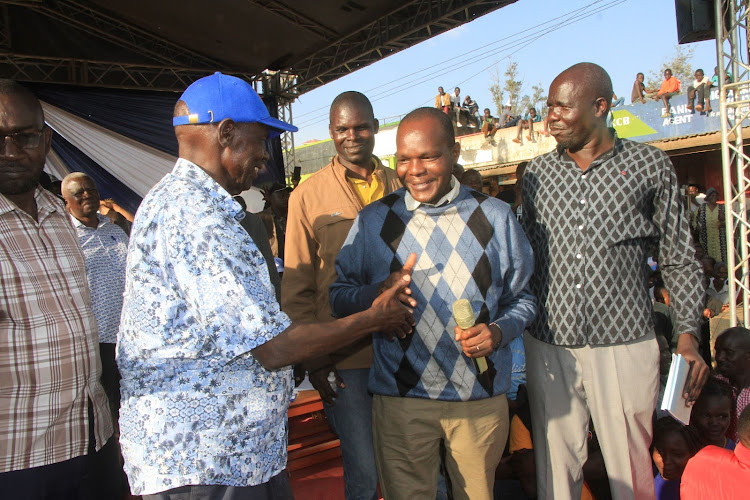 The speaker asked his supporters not to waste their votes by voting for him as an independent candidate.

"You will see my face in the ballot paper but don't vote for me. I will also not vote for myself, but for Pesa," Okoth said.

He said supporting Pesa was a plan with other governor candidates to try and lock out Senator Ochillo Ayacko, the ODM candidate.

He said they agreed that when it reaches a point where DAP-K's candidacy for the seat would not be tampered with, they would support Pesa.

Without naming Ayacko, Okoth indicated he had been approached to support him but refused. He said he was among the people who frustrated his leadership, as he said his journey has been revolving around courtrooms and hospital.

"This other person asked me to go and support him. But how can I support someone who has made me suffer? I cannot support such a person," Okoth said.

On February 8, Migori MCAs impeached Okoth, accusing him of abuse of office, gross misconduct and allegedly breaking into the Finance office and stealing equipment. He denied misconduct.

MCAs who had resumed sessions for a sixth sitting, tabled a motion immediately to kick out the speaker.

MCAs said Okoth had held the assembly captive by his actions and they were unable to execute their oversight role as required.

They accused him of being an obstacle and gagging assembly members who opposed his moves.

Attempts by Okoth to access his office have been met by violent resistance by staff and MCAs.

Pesa thanked Okoth for supporting his bid and promised to include him in his administration. He asked voters for their support.

On Friday, Ayacko concluded his campaigns at the same Posta grounds. He promised an inclusive government after incumbent  Okoth Obado exits after serving two terms.

He said Migori has 378 candidates for five elective posts across 40 wards and eight constituencies. It has 469,053 voters, including 34 in prisons.

John Okinda, the presiding bishop of PEFA church, on Sunday called for peace and urged politicians to air their grievances during legal channels.

“We want politicians to stop any attempt at creating turmoil, ensuring the voting process is peaceful,” Okinda said.

Senator says despite long rivalry with Obado, their differences are not personal.
Counties
1 month ago

Her charming address to Migori residents to back her husband surprised Kenyans.
News
1 month ago