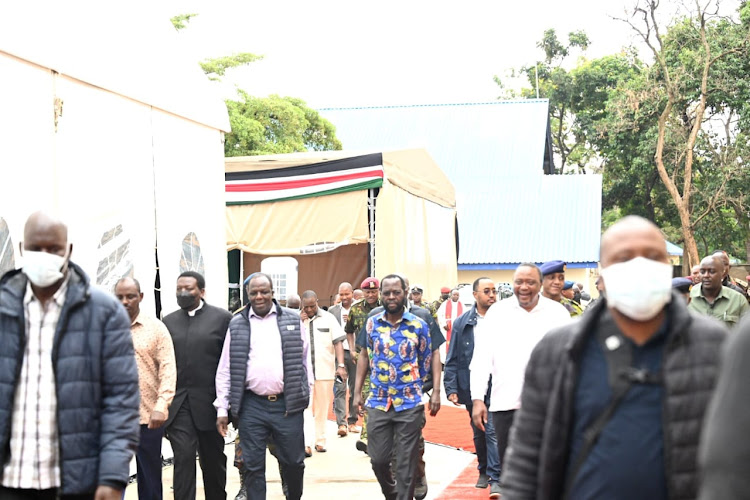 President Uhuru Kenyatta’s visit to Kisumu brightened up Nyanza as he doled out development goodies to a region that suffered neglect for decades by previous regimes for being in the opposition.

Excited residents warmly received the President, who landed in Raila Odinga's backyard on Monday for a three-day working trip to the lake side city and Western region.

Uhuru's visit, less than a week to the general election, was not just historic and of significant economic meaning but also served to send a strong  political message to the region on his resolve to ensure Raila's supporters turn out in large numbers to vote on Tuesday.

Since the handshake that calmed political temperatures in the country,  Uhuru has made numerous visits to the Nyanza region to cement their political cooperation.

While in Kisumu, the President rallied support for Raila, urging Kenyans to vote for the  Azimio presidential candidate and running mate Martha Karua, saying the duo were the best bet to steer his legacy of peace,  justice, trust  and respect.

And Nyanza immediately  heeded to the head of state's calls, with most residents in their reactions to Uhuru's tour vowing to wake up early to vote.

James Okelo,  a resident of Kisumu, was full of praise for the outgoing President, whom he described as having been kind to Nyanza particularly after the March 2018 handshake.

"We will dearly miss him. We got to see the soft side of the President after the handshake.  He has made Nyanza his favourite place and we feel honoured that he found it necessary to bid us farewell before he exits," Okelo said.

"His administration has initiated and revamped a number of development projects here, which will provide job opportunities to residents and we are happy," Atieno said.

She cited the ultra modern railway station in Kisumu, which was commissioned by the President on Monday as one of the avenues for growing businesses.

The facility will have spaces for traders to operate from as they take advantage of the travellers to and from the city.

"As a Jubilee Party candidate, I have noticed a very positive paradigm shift in the behaviour and approach of the President," he told the Star on Tuesday.

"My party leader has genuinely embraced Nyanza as an essential part of Kenya, inspecting projects, ranging from the port, where vessels are being revived, twater harvesting and storage (Koru-Soin), Trauma Centre at Nyabondo Hospital to roads being modernised," he said.

He said others may view the visit as a political game changer, but as far as he is  concerned, the President  is leaving very positive footprints for the good of the future generations.

"It's a pity our people have not learnt the art of celebrating success getting over excited, celebrating processes rather than results," Okolo said.

He said Nyanza  region expects positive results in the forthcoming general election. "We  need to separate political games from the visible developmental indicators."

He said the tour by Uhuru would help a lot in terms of voter mobilisation in the region.

"It certainly is getting us from the unfortunate comfort zone ( gini wasekawo! - the mentality that we have won ) which is dangerous as many voters would otherwise stay at home on the big day," he said.

Its deployment will grow Kisumu Port's haulage capacity to over 3,060 tonnes by complementing the 1,260-tonne, 1966 assembled MV Uhuru.

The President on Monday commissioned the Kisumu Railway Station, expressing optimism the rail transport will boost the city's status as an economic hub in the Western region.

He emphasised the importance of infrastructure in accelerating development, boosting economic growth and improving the lives of Kenyans.

Later, Uhuru officially opened the Dada Export Processing Zone Limited, a garment manufacturing factory for the export market that will create hundreds of jobs for residents.

He commissioned the Kisumu Shipyard in May last year.
News
1 week ago

Uhuru arrives in Kisumu ahead of projects launch

Various local leaders will flank the president during his tour.
News
1 week ago

He is expected to oversee the floatation of MV Uhuru II ship, which is nearing completion
Counties
1 week ago
“WATCH: The latest videos from the Star”
by DICKENS WASONGA
Nyanza
03 August 2022 - 05:00