The Sh2.4 billion ship with a capacity of 1,800 tonnes was built at Kenya Shipyard Ltd in Kisumu.

• The Sh2.4 billion MV Uhuru II, with a capacity of 1,800 tonnes, was built at Kenya Shipyard Ltd's Kisumu facility.

• According to Kenya Shipyard Ltd, assembling the ship locally has saved Kenyan taxpayers Sh1.3 billion, an amount that would have been used in imports. 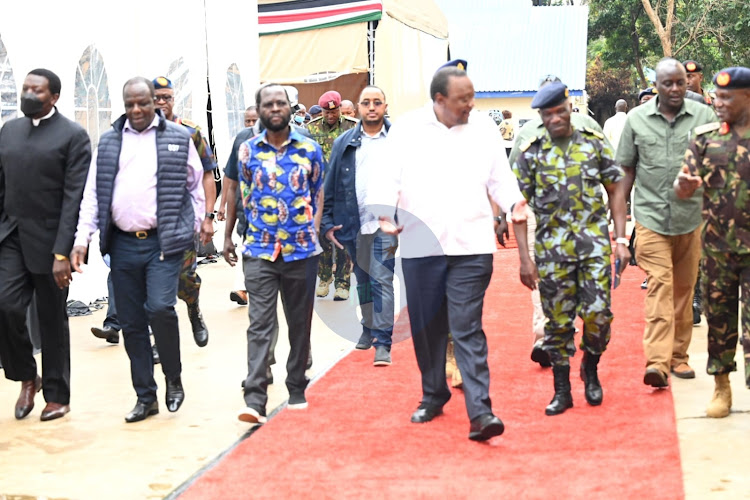 President Uhuru Kenyatta when he arrived for the official commissioning of Kisumu Shipyards on Tuesday.
Image: MAURICE ALAL

President Kenyatta on Tuesday commissioned the Kisumu shipyard and floating of MV Uhuru II, which is the first ship to be built locally.

Construction of the ship, which is now floating in Lake Victoria, is nearing completion.

The MV Uhuru II will be commissioned later this year to complement the old MV Uhuru 1 built in 1966.

The President arrived at the shipyard around 11am and immediately started his inspection around the yard, as a live band in one of the stand-alone tents entertained guests.

In the main tent, there were various national and regional leaders.

The President had to put on his raincoat to inspect the shipyard as rain pounded the lakeside city.

Other dignitaries accompanying the President were shielded from the rain using umbrellas.

The President was taken to the stand where there was an artificial impression of the MV Uhuru II cargo ship. He was taken through the entire process of the ship construction.

This was followed by a floating and naming of the ship ceremony at around noon.

A brief prayer session was held for MV Uhuru II ship in the Dry Dock area.

The President then opened the valves at the dockyard for the first time since the construction of the ship started.

The exercise is important in ship building to detect any leakage before it is launched.

The Sh2.4 billion MV Uhuru II, with a capacity of 1,800 tonnes, was built at Kenya Shipyard Ltd's Kisumu facility.

It was built by Kenyan agencies, including the KDF, in partnership with Dutch firm Damen Shipyards.

This is the first ship to be constructed and assembled locally.

According to Kenya Shipyard Ltd, assembling the ship locally has saved Kenyan taxpayers Sh1.3 billion, an amount that would have been used in imports.

It will complement the old MV Uhuru 1 built in 1966 and is being operated by Kenya Railways. The ship ferries goods, mainly petroleum products, to Uganda.

Completion of MV Uhuru II will bring the total Kenya vessel capacity at the Port of Kisumu to above 3,060 tonnes.

He noted how the restoration of rail transport in Kisumu will lower the cost of ferrying goods.
InPictures
1 week ago

He commissioned the Kisumu Shipyard in May last year.
News
1 week ago

The President is on a two-day working visit of Kisumu County.
News
1 week ago
“WATCH: The latest videos from the Star”
by FAITH MATETE
Nyanza
02 August 2022 - 22:00