• President Uhuru Kenyatta on his final tour commissioned the shipyard, which has built its first vessel, the MV Uhuru II cargo carrier withKDF.

• Defence Cabinet secretary Eugene Wamalwa said the shipyard will create revenue for the government as well as jobs for the youth. 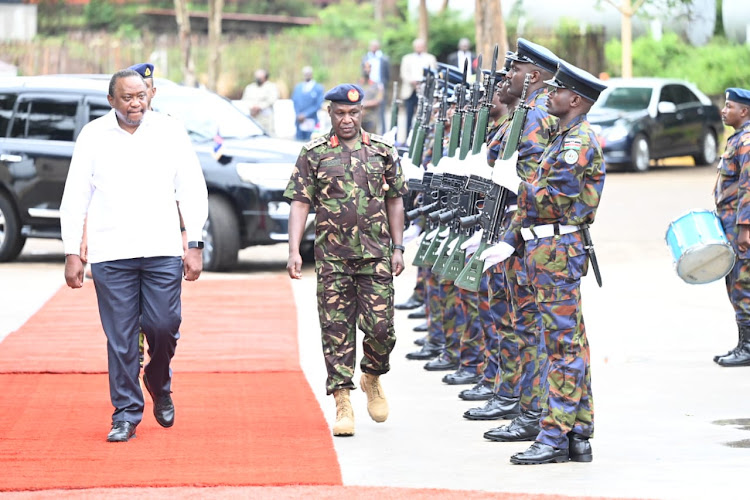 Trade within the East Africa Community is expected to expand greatly with commissioning of the Kisumu Shipyard Limited and floatation of the MV Uhuru II.

He said the project will be crucial in growing the country’s economy. The EAC member states are Kenya, Uganda, Rwanda, Tanzania, Burundi, South Sudan and DR Congo.

“The port will create jobs and business opportunities for Kenyans and increase their income if put into good use,” Uhuru said.

He urged Kisumu Governor Anyang Nyong’o and neighbouring counties to take advantage of the port to create jobs for young people.

The Sh2.4 billion, 1,800-tonne vessel was built by KDF in partnership with the Dutch firm, Damen shipyards.

The  MV Uhuru II will be commissioned later this year.

More than 2,000 youths are employed at the port.

He said fishing will be enhanced and ties improved in EAC countries sharing the Lake.

The CS praised KDF for completing the project on time, despite the Covid-19 pandemic and other challenges. Construction began in May 2021.

As it is strategically located, Kisumu Shipyard will provide many business opportunities and economic activities in the region through cost-effective construction of vessels.

The shipyard will also maintain vessels in sound operation. Wamalwa said both government-owned and private vessels will be service at the shipyard.

Kenya joins the league of South Africa and Egypt in shipbuilding, with shipyards in Kisumu and Mombasa.

Eighty to 90 per cent of global trade is by water. The government is keen to invest.

"The key subsectors of the blue economy, which include maritime transport and logistics, fisheries, as well as shipbuilding and repair, represent low-hanging fruits that must be exploited,” the President said.

The Kisumu Shipyard has created at least 1,897 jobs, with ripple effects throughout the local economy.

It will complement the old MV Uhuru I being operated by Kenya Railways, currently ferrying mainly petroleum products to Uganda.

MV Uhuru I has a capacity of 1,260 tonnes. To date, it has made more than 90 voyages to Port Bell in Uganda.

This has cut the transit time to 13 hours compared to four to six days by road, with clearance delays at the border during the pandemic.

"We will take advantage of the connection between the SGR and the refurbished metre-gauge railway that creates a flow of cargo from Mombasa to Kisumu . This will increase volumes shipped through the lake, meaning more business for Kenya." the President said.

Once completed, the MV Uhuru II will raise the total Kenya vessel capacity at the Port of Kisumu to more than 3,060 tonnes.

The government gave a 40 per cent waiver on importation of materials, making it cheaper to build vessels locally.

Kenya aims to increase exports and transshipment volumes through Kisumu Port and Lake Lake Victoria. It plans to expand into motor vehicles and containerised cargo.

The demand for the use of Kisumu Port is increasing with lake transport cutting the cost of freight to Uganda by as much as 30 per cent, compared to road.