• Gogo has been engaging in a fierce political battle with her predecessor Oner as they outdo each other in their campaigns. 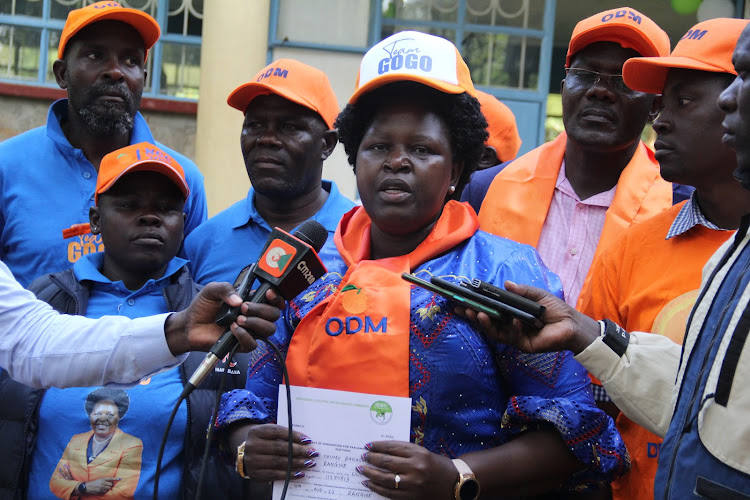 Rangwe MP Lillian Gogo is hoping to be reelected in next week's polls as she struggles to break the jinx of serving the constituents just for one term.

All her predecessors have served just one term since the 1992 multi-party elections.

Joseph Ouma Muga won the seat when the constituency was first created for the 1988 election. He lost to Ray Ndong in the 1990 election under the one-party state of Kanu.

Muga recaptured the seat in the 1992 election but lost in 1997 to Shem Ochuodho.

In the 2002 election, Ochuodho lost to Philip Okundi, who would later be dethroned by Martin Ogindo in the 2007 polls.

In 2013, Ogindo lost to George Oner before Gogo took over in the 2017 election as the first female MP in the area.

Gogo has been engaging in a fierce political battle with her predecessor Oner as they outdo each other in their campaigns.

In her campaigns, Gogo is asking residents to reelect her on grounds that her office has prudently utilised public funds (NG-CDF). She argues that bursary funds have been distributed to students without discrimination.

She has been asking women and youth who are the majority voters to stand with her, saying she has empowered them economically through Uwezo and Youth Fund.

“We initiated projects which need to be completed after the August 9 election. Let our people elect me again for the continuity of development,” Gogo said.

The MP said she has installed street lights at Rangwe, Omoya and Asumbi trading centres.

She has also been involved in flood mitigation in lower Kochia, improvement of school infrastructure and drilled boreholes for residents.

Independent Electoral and Boundaries Commission records show that the constituency has 58,886 registered voters.

Analyst Agwagra argued that clan politics is likely to determine who emerges the winner. ODM factor can also influence people since it is the dominant party in the area.

“Rangwe people vote in line of their clans and that is likely to reoccur in next week's polls. Kochia, Kagan and Gem people want a candidate from their clan to win the seat,” Agwagra said.

Oner comes from Kagan while Kachuodho hails from Kochia as well as Odaji. Rhodi is from Gem West.

Kachuodho and Oner have intensified their campaigns with a promise to provide good leadership.

Kachuodho asked residents to support his candidature, saying he has ideas on how to improve the lives of residents.

The agriculture expert told voters to go for personality and not political parties.

“It is time for the people of Rangwe to vote for the right person who will provide servant leadership,” he said.

Oner, who quit ODM after the party handed the direct ticket to Gogo, said he wants to bring Rangwe back on the development track.

“Gogo has underperformed. She has not been accessible to many people of Rangwe,” he said.

DAP-K aspirant Kachuodho asked residents to go for personality and when electing their leader
Counties
3 months ago
“WATCH: The latest videos from the Star”
by ROBERT OMOLLO
Nyanza
01 August 2022 - 22:00