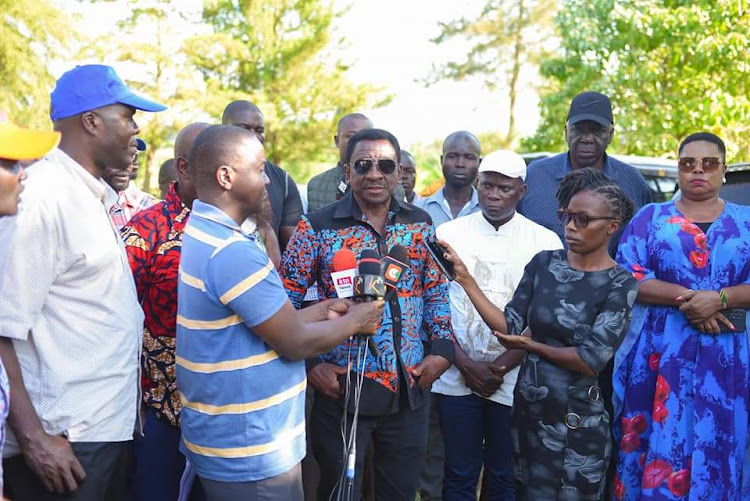 After  months of intense campaigns,  Senator James Orengo will on Monday launch a nine-point manifesto  he hopes will convince Siaya voters  to elect him as their next governor.

The senator, who seeks to replace incumbent Governor Cornel Rasanga  on ODM ticket, will launch the manifesto at Jaramogi Oginga Odinga University of Science and Technology in Bondo.

The ceremony is expected to be graced by top ODM and Azimio leaders from across the country. A copy of the manifesto seen by the Star provide the highlights of the agenda that Orengo, who has been in the political scene for decades,is promising to the residents of Siaya.

Top on his wish list is the immediate upgrade of Siaya County Referral Hospital and ensuring that drugs are available in all health facilities. The county has 174 health facilities out of which 123 are public.

Orengo is also pledging to invest in clean and reliable  water  supply powered by solar energy. Another priority of his administration should he win the August 9 election is to revamp agriculture and provide inputs to farmers.

As one of his legacy projects,  Orengo promises to establish village councils in accordance with the County Governments Act.

The senator says his government  will identify,  protect and market important tourist attractions in Siaya and construct a modern conference, cultural and arts centre in Siaya town.

Speaking to the Star ahead the launch,  the senator promised Siaya residents a transformative, efficient and inclusive government.

"Our agenda and intension is to improve the  health and citizen's wellbeing.  We shall strive to promote food security, create jobs and reduce incidents of poverty," he said on Sunday.

"We will ensure we develop full economic potential through trade and industry by providing appropriate environmental services," he added.

To achieve food security, his administration will reclaim part of Yala swamp for optimal use and sustainable agriculture. He said his government will strike a balance between investor interest and the community while utilising Yala swamp land.

"To scale up access to clean water,  we plan to pump water from Lake Victoria to the highest point in Bondo and Asembo before supplying it to homes," he said.

Orengo said his administration will open up a ring road around Lake Kanyaboli to promote tourism, fishing and sports in the oxbow lake.

" We will also secure patrol boats to man all the 57 Lake Victoria landing beaches found in Siaya county  and establish a police base in each of the islands within Siaya," he said.

And to coordinate the implementation of his legacy projects,  Orengo has pledged to establish  Siaya County Development Authority.

He also intends, within 100 days of his election, to introduce a feeding programme in all the 700 public early childhood education centres.

"Within 100 days my administration will also establish full scholarship for 60 students per ward under the Governor Scholarship Scheme," Orengo said.

The senator is optimistic that the race is his to lose. He has the support of the six MPs from Siaya including Ugenya MP David Ochieng of MDG . He is also backed by Governor Rasanga who has embarked on joint campaigns with the senator.

His party ODM commands a huge following in the region and with recent endorsement by the Azimio presidential candidate Raila Odinga, Orengo has a head start against his rivals amongst them Nicholas Gumbo, who is seen as senator's main challenger.

The other candidate in the race is Millicent Oduor of UDA. She is in a tough situation considering that her party is not among the Azimio affiliate parties whose leadership enjoys massive support in Siaya county and across Nyanza.

Post a comment
WATCH: The latest videos from the Star
by DICKENS WASONGA
Nyanza
17 July 2022 - 22:00
Read The E-Paper