Uhuru told me he would go home with Raila, claims Mudavadi

Says Uhuru knows Kenya Kwanza will form the next government and his support for Raila is not genuine. 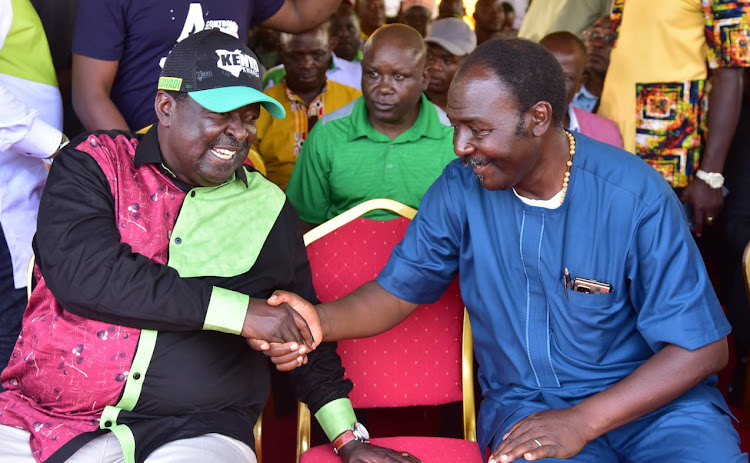 “I want to say this before TV cameras so that they can capture and let Uhuru deny it because he said it,” he said.

Mudavadi did not however disclose when the two spoke.

He said Uhuru knows that Kenya Kwanza will form the next government and his support for Raila is not genuine.

“Ask him why he has not delivered elected leaders in his Kiambu county to Azimio if he is serious and wants to assist Raila. All of them starting from MCAs, MPs, senator, woman representative and governor are in Kenya Kwanza,” he said.

Mudavadi said Uhuru lied to Raila that he would ensure the collapsed BBI passed, knowing well that the process could not stand the test of the law.

He said Uhuru promised to personally campaign for Raila in his Central Kenya backyard, but he has not done so a month to the election.

Mudavadi was addressing a campaign rally in Shiiru, Hamisi constituency, in Vihiga county on Tuesday.

Mudavadi and Ford Kenya leader Moses Wetang'ula have launched an offensive against Raila in the five Luhya-dominated counties of Bungoma, Vihiga, Busia, Kakamega and Trans Nzoia.

The two have been holding parallel rallies in different parts of Western and occasionally addressing rallies together as they consolidate support for Deputy President William Ruto.

They are driving the narrative that the Luhya community has not benefited from the support it has given to Raila in the last 15 years.

They say it's time to support Ruto, who has promised to give a 30 per cent share of the government to Luhyas if elected president.

Raila, on the other hand, is fighting to retain the support he has enjoyed in the vote-rich region in the past through Kakamega Governor Wycliffe Oparanya and Defence CS Eugene Wamalwa.

Raila is expected to pitch tent in the region starting Saturday to counter the forays by Ruto.