• The county failed to hit its own source revenue collection target by Sh81.72 million or 33 per cent. 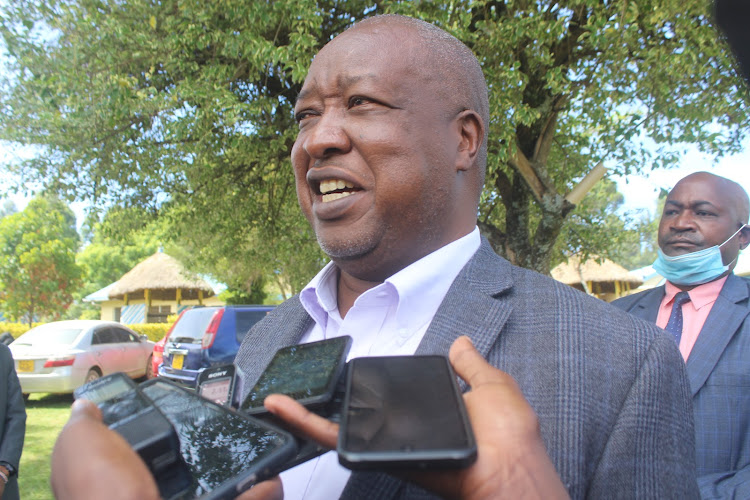 Projects valued at more than Sh550 million have stalled in Nyamira even as the devolved unit accumulated Sh2.23 billion pending bills, a new audit report shows.

The 2020-21 financial audit report for Nyamira executive also exposes substandard work by firms contracted to do the projects.  The county failed to account for several expenditures amounting to billions of shillings.

The report, which could put Governor Amos Nyaribo’s administration in a spot, shows projects including roads, classrooms, waterworks and stadia have either been delayed or stalled.

Payments of more than Sh200 million had been made for stalled and abandoned projects, with the audit showing there is no indication of the projects being revived.

Others include the construction of a classroom and pit latrine at Matiero primary ECDE, classrooms at Bigege Vocational Training, county headquarters, an inpatient ward block at Nyamusi, Manga stadium and a pavilion.

The report shows the county awarded Sh34.23 million for the construction of an inpatient ward block in Manga subcounty.

The project started in 2017 and was expected to be completed in 36 weeks.

However, the contractor did not beat the deadline forcing the county to extend the period by six months to end on October 15, 2021.

Already, Sh6.27 million has been paid to the contractor.

Physical verification in the month of November 2021 indicated that the work remained incomplete and a new contractor had not been identified to complete the work, the report indicates.

At Magwagwa subcounty, the county awarded a Sh64.55 million contract for the construction of inpatient wards and paid Sh24.01 million.

However, the work was incomplete months after the set completion date.

The report adds that Nyamira taxpayers risk losing Sh37.54 million that had been pumped into the stalled construction of the Covid-19 isolation complex at Nyamira County Referral Hospital.

The Sh95.86 million project was expected to be completed within 16 months from November 2020.

“Physical verification in the month of November 2021 showed that the contractor was not on-site and the work remained incomplete with construction work only done on slabs and pillars,” the report reads in part.

“Consequently, the regularity and value for money of the expenditure of Sh37.54 million could not be ascertained.”

The project, the report shows, has fallen behind schedule despite gobbling Sh167.38 million, with only 44 per cent of the work done.

“Physical verification on November 9, 2021, showed the project had taken 150 days and it was not possible that the remaining works would be completed within six weeks of the remaining contract period,” the auditor notes in the report.

The report also shows that eight water projects valued at Sh75.15 million were either incomplete or abandoned at the time of the verification in November last year.

“No adequate explanation was provided by management for the unsatisfactory state of the projects. As a result, the funds spent on the projects have not provided the expected utility and value for money to Nyamira residents.

The report further indicts the county executive for accumulating Sh2.23 billion in debt. The auditor questioned the authenticity of some debts as the county did not provide supporting documents.

And as the county accumulated the debt, it failed to hit its own source revenue collection target by Sh81.72 million or 33 per cent.

It however spent up to 46 per cent of its revenue on payments to its staff. This is contrary to the law which caps staff emoluments at 35 per cent.

Only Sh1 for county projects as salaries gobble billions – CoB