Tsetse flies cause trypanosomiasis in livestock and sleeping sickness in humans.

•KENTTEC is in Siaya to support farmers and create awareness since controlling tsetse fly is very expensive and unaffordable to the farmers. 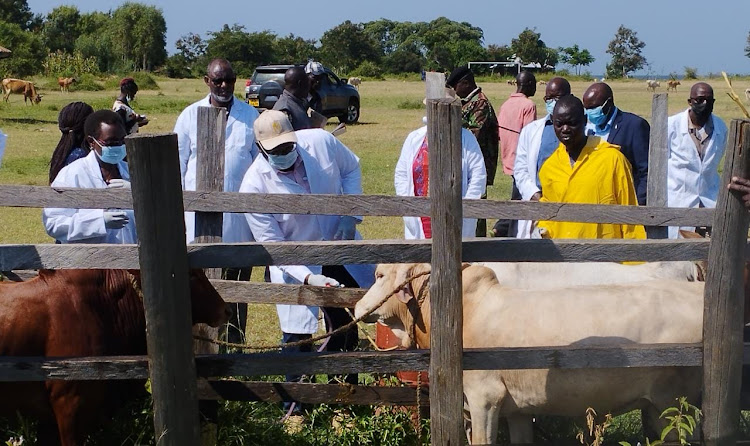 The Kenya Tsetse and Trypanosomiasis Eradication Council in and Dada Pamela Foundation have embarked on tsetse fly control in the Lake Victoria Basin.

Tsetse flies cause trypanosomiasis in livestock (Nagana) and sleeping sickness in humans.

The council's chief executive officer Pamela Olet said mass spraying of livestock is one of the most effective ways to control the tsetse fly menace.

Olet said the Lake Victoria basin is still prone to sleeping sickness and there is a need for continuous vigilance since the disease has not yet been declared fully eradicated.

She spoke during the mass spraying of livestock in Siaya on Wednesday.

KENTTEC is in Siaya to support farmers and create awareness since controlling tsetse fly is very expensive and unaffordable to the farmers.

She called on livestock stakeholders to partner with KENTTEC and help farmers in combating tsetse flies.

“The people living in this region should be aware of tsetse flies and trypanosomes and remain vigilant,” she said.

“We have introduced new methods to combat them which is commonly near Lake Victoria shore and causes diseases among the people and livestock.”

“We are in Siaya to sensitise farmers against Nagana and sleeping sickness since we are not yet off the hook,” Chemweno said.

He said the intervention made by KENTTEC and other partners has seen the problem suppress in the region.

“We are recognising the milestone made over the time in creating an enabling environment free of tsetse flies and trypanosomiasis because it has affected the livelihoods of many people in this region,” he said.

Chemweno said supporting livestock farmers is in line with the government blueprint of the Big Four Agenda on food security.

He said tsetse flies are still a problem to most farmers and an expensive venture in treating infected animals and with the government intervention, they expressed hope that the menace will come to an end.

There are close to 10 economically important species, all of which feed on blood and transmit the Trypanosoma parasites, which are responsible for sleeping sickness in humans and animal trypanosomiasis in cattle.

The continuing presence and advancement of tsetse into agricultural systems prevents sustainable and profitable livestock systems in almost two-thirds of sub-Saharan Africa.

Since agriculture cannot function effectively without the benefits of livestock (traction power for transport and ploughing, manure for fertiliser and fuel, and nutritious food products) tsetse flies are at the root of poverty.

Tsetse flies cause trypanosomiasis in livestock (Nagana) and sleeping sickness in human beings
Counties
1 week ago
“WATCH: The latest videos from the Star”
by KIPLANGAT KIRUI Correspondent
Nyanza
23 June 2022 - 22:00