The party candidates led by Gladys Wanga who is running for governorship, Senator Moses Kajwang and woman representative nominee Joyce Osogo have difficulties in pushing for six–piece voting pattern. 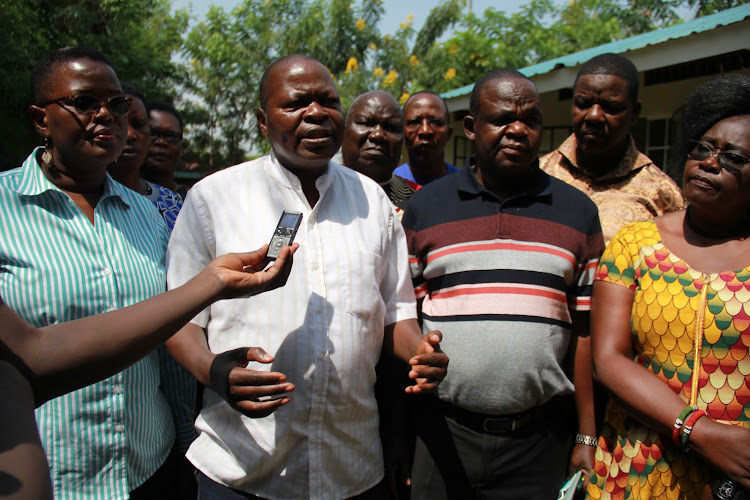 The strength of ODM in Homa Bay will come under a tough test in August polls after a team campaigning for Raila Odinga said they won't favour party candidates.

Misori argued that they want to embrace all political parties affiliated with the Azimio la Umoja One Kenya Coalition.

Raila (ODM) is contesting the presidency under Azimio with his running mate Martha Karua of Narc Kenya.

Speaking during their first meeting in Homa Bay town on Sunday, Misori and the coordinator Agutu Jakorayo said their focus is on voter turnout during elections day.

Misori said they are not going to discriminate other political parties in Azimio as they campaign for Raila in Homa Bay.

“Our system is called six-piece Azimio and we’ll want the best and most popular candidate within Azimio-One Kenya to win. Our agenda is to have a 100 per cent voter turnout in Homa Bay,” Misori said.

Joyce Osogo will vie against Mary Ojode of DAP-K in woman rep post.

“We would not wish to antagonise candidates within Azimio. We are on a path that guarantees victory for Raila,” he said.

Jakorayo and team member Florence Ouma expressed optimism of delivering on their mandate.

When asked to explain if they are going to weaken ODM's strength in Homa Bay, the team said their focus is on Raila's presidency.

“I know we’re going to succeed because we have a structural agenda,” Jakorayo said.

Ouma said they do not want grassroot competition among Azimio parties.

She said Homa Bay has in the past led in regional politics and they don't want to be left behind on August 9.

“We will ensure residents come out in large numbers and vote for Raila,” she said.

ODM is perceived to be the dominant party in Homa Bay on grounds that most of its candidates win in past elections.

In the two previous general election, all eight MPs, senator, woman representative and governor were elected on an ODM ticket. The county assembly has 38 MCAs out of the 40 wards all elected under ODM.

Since ODM conducted its primaries in Homa Bay in April, the party has been grappling to maintain popularity following disputed results.

Many aspirants who lost criticised some Homa Bay leaders for allegedly colluding with the party’s National Elections Boards to shortchange them.

Party candidates led by Gladys Wanga, who is running for governorship, Kajwang and woman representative hopeful Osogo have faced difficulties in pushing for a six-piece voting pattern.

ODM national chairman John Mbadi who is also in the Azimio Nyanza campaign steering committee has waded into the matter saying six-piece is not practical in the region.

Mbadi wants ODM nominees to come up with strategies for wooing residents, adding that they are giving equal chance to all Azimio candidates.

Party boss says politics is about democratic competition, not restricting opponents.
Counties
1 week ago
“WATCH: The latest videos from the Star”
by ROBERT OMOLLO
Nyanza
20 June 2022 - 22:00