Nyamira IDPs threaten to boycott polls if not resettled

For 15 years, the Internally Displaced Persons have been camping at the county commissioner’s office 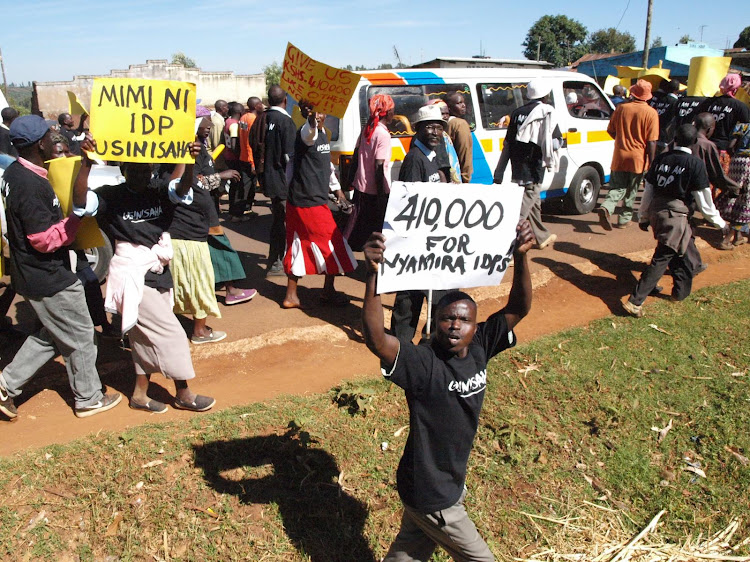 Unsettled IDPs in Nyamira, who were displaced by the 2007-08 election violence are now demanding to be resettlement or boycott the August 9 general elections.

For 15 years, the Internally Displaced Persons have been camping at the county commissioner’s office demanding resettlement.

“We have been in the tents for the last fifteen years and we have been surviving by the grace of God. We are not going to entertain any more lies,”  Juliet Moraa who was displaced from Molo, in Nakuru county said.

The IDP's led by Momanyi Agwata have said they should be paid their compensation before the election day or else they will not vote.

“We know a time will come when leaders will be giving us false promises to get our vote but they should be informed that it will not happen. We resolved that none of us is going to vote until we are resettled," Agwata said.

They have been complaining for two years about delays in getting their compensation and even with regular follow-ups, nothing has been done to ensure they get their right.

“We are aware during the Mashujaa Day celebrations in Kisii a year ago, President Uhuru Kenyatta gave out money to settle the issue of IDPs once and for all." Nyamoko said.

"We don't know whether there were cartels that diverted the money to their pockets and it did not reach the IDPs."

President Uhuru Kenyatta on Wednesday took a swipe at opposition leaders for criticising the compensation of IDPs in Kisii. The President said the ...
News
5 years ago

ODM MPs have accused President Uhuru Kenyatta of bribing voters in the guise of compensating IDPs in Kisii and Nyamira during campaign tours.Uhuru ...
News
5 years ago
“WATCH: The latest videos from the Star”
by ALVIN RATEMO Correspondent, Nyamira
Nyanza
12 June 2022 - 22:00