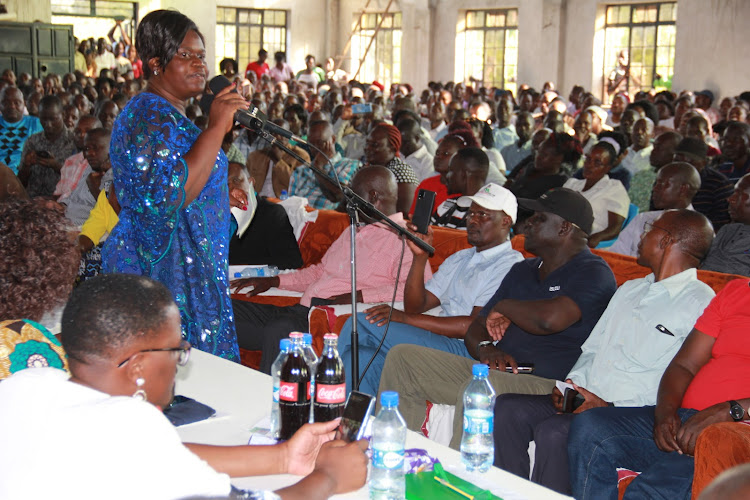 Homa Bay Woman Representative and governor aspirant Gladys Wanga during a meeting with teachers at Kowuonda in Ndhiwa on May 14, 2022
Image: ROBERT OMOLLO

Speaking separately, the two politicians argued they have gained adequate skills and knowledge that can enable them to manage and deliver services to residents.

Previously, the two have engaged in accusing each other over last month's ODM party primaries.

But on Saturday, Wanga and Kidero engaged residents and explained to them why they need to get voted as Homa Bay governor.

Their campaign talks were anchored on track record to woo residents with promises they will implement the agendas should they get voted on August 9.

Wanga said she has work experience spanning 20 years, 10 of which she was in private sector while the other 10 as a Woman Rep.

She argued as the current chairperson for Finance Committee in the National Assembly, she has gained skills in finance management.

“Don’t doubt me because my qualification befits succeeding Governor Awiti. We must fix these problems that have bedevilled Homa Bay for the past 10 years,” Wanga said.

Speaking on Saturday when she and ODM candidates met teachers in Ndhiw town, Wanga distanced herself from claims she will inherit some county officials who worked under Awiti’s administration.

Governor Awiti and his officers have been accused of doing little which has seen Homa Bay rated low in performance.

Together with her running mate Oyugi Magwanga, Wanga reiterated that their administration will have a fresh start.

She said development projects will be implemented in order of priorities.

“We’re not going to recycle county officials because we don’t have such an agreement. I believe we have good and fresh brains to help us transform Homa Bay.

On his side, Kidero said he has been a manager in private sector and the first governor of Nairobi county.

The former governor said he has what it takes to put Homa Bay in national map of development.

Kidero has an eight-point agenda which he is selling to the people of Homa Bay.

He said residents should never gamble with the county leadership again, adding that Homa Bay needs a tested and qualified leader.

“Homa Bay people need fish, sugarcane and potato processing plants to make it take off. I’m the best person to bring the real change which our people want,” Kidero said.

He spoke when he met his supporters at Makongeni in Homa Bay town on Saturday.

Kidero said his government will partner with other stakeholders to ensure the plight of sugarcane farmers is addressed.

“Having another sugar processing factory in Ndhiwa is something we can do. The main problem affecting cane growers is bad roads and lack of market which can be sorted through public private partnership,” Kidero said.

He took the same gospel to Mbita in Suba North constituency where he promised his government will address water shortage and improve healthcare service. 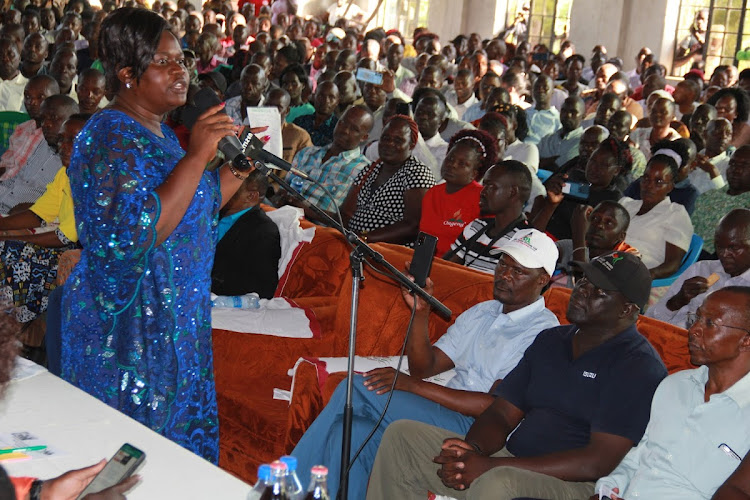 Homa Bay Woman Representative and governor aspirant Gladys Wanga during a meeting with teachers at Kowuonda in Ndhiwa on May14, 2022
Image: image: ROBERT OMOLLO

Kidero is an independent candidate while Wanga is seeking seat on ODM ticket.
News
1 month ago

In all constituencies, MP ticket winners face at least two independents who quit party after losing nomination.
Counties
1 month ago
“WATCH: The latest videos from the Star”
by ROBERT OMOLLO
Nyanza
15 May 2022 - 22:00