•He assured their supporters that they will soon unveil a candidate to face Nyong’o after what they termed as shambolic ODM primaries.

•He appealed to Raila to focus on his presidential bid and leave aspirants to face the electorate. 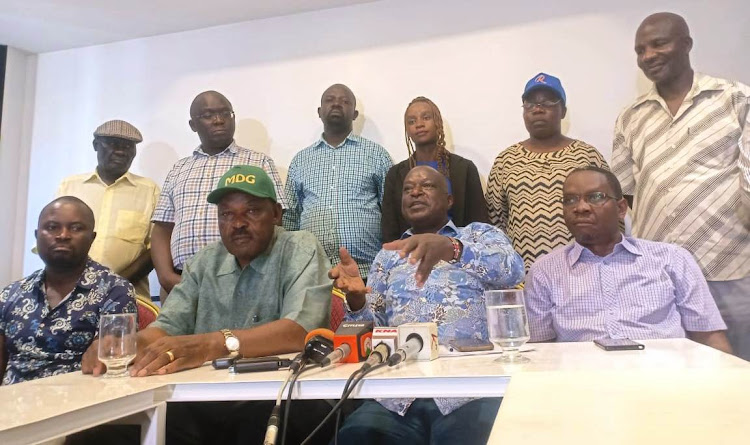 Kisumu Senator Fred Outa has said their alliance is united and committed to unseat Governor Anyang Nyong’o in the August 9 polls.

He assured their supporters that they will soon unveil a candidate to face Nyong’o after what they termed as shambolic ODM primaries.

The trio who addressed the press on Tuesday had teamed up with former Kisumu Central MP Ken Obura, whom they fronted to battle out for the ODM ticket with Nyong’o.

However, the party gave a direct ticket to Nyong’o.

They indicated that they have other plans to field another candidate to face the incumbent should ODM hand direct nomination.

Sources privy to their arrangements said the team will back Ranguma to recapture the seat.

Already, the ex-governor has secured an MDG ticket to contest for the seat.

“Among us we will still field a candidate to contest with Nyong’o in August. We have a strong candidate to deliver victory,” he said.

Outa reiterated that they will fast track their campaign and  focus on drumming up support for ODM leader Raila Odinga’s presidential bid.

“We are ready to roll out our campaign which will be intertwined with the presidential campaign,” he said.

The senator however dismissed the six-piece voting, saying voters should be allowed to elect leaders of their choice.

He appealed to Raila to focus on his presidential bid and leave aspirants to face the electorate.

“We have greased Raila’s coat and no aspirant will be able to hang on it because it is slippery,” he said.

The ODM chief had on various occasions urged voters in his Nyanza backyard to vote six-piece for ODM aspirants.

Most of the ODM aspirants were handed direct tickets, a move that left many voters angry after their preferred aspirants were overlooked in favour of party diehards.

Outa said the move could boomerang on Raila's presidential bid as it may create voter apathy among Nyanza people.

He said voters would be encouraged to come out in large numbers if their favourite aspirants were on the ballot.

Oloo said voters should be allowed to elect their preferred leaders to rescue them from bad governance and leadership.

“We are not fighting Nyong’o but our common goal is to unseat him and bring in a fresh leadership to transform the lives of our people,” Oloo said.

Ranguma said they are focused to initiate and complete the projects that cater for the needs of residents.

He says the ODM chief should allow the people of Kisumu county to elect the leaders they want.
Counties
4 weeks ago

Party official, Ochieng says those seeking the ticket are wasting their time and effort
Counties
2 months ago

They say the Kisumu governor aspirant is peacefully traversing the county to popularise his bid.
Counties
2 months ago
“WATCH: The latest videos from the Star”
by MAURICE ALAL Correspondent, Nyanza Region
Nyanza
11 May 2022 - 22:00