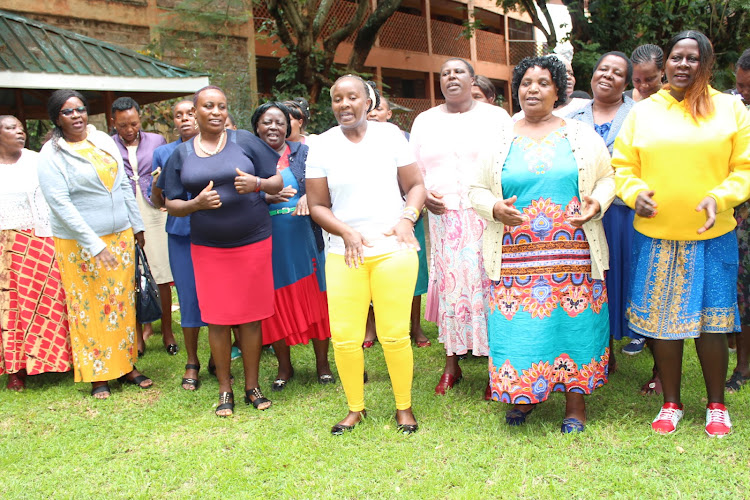 Women during a press briefing on April 21
Image: Alice Waithera

Women seeking elective seats in Kisii want more political space  to help them sell their agenda to the electorate.

They claim their male counterparts are allocated more time than them during campaigns.

Jubilee woman representative aspirant Peris Onsarigo is among some of the hopefuls calling for more visibility for female aspirants.

On Tuesday, Onsarigo said the situation gets worse at burials events, where women aspirants are often sidelined.

She said it is common to see people seeking county assembly seats get more time while those seeking higher offices are locked out.

"We often ask ourselves why should this discrimination take place. Picture this scenario where six ward rep aspirants  are given an opportunity to speak while we are told to sit down and listen," Onsarigo said.

She said it is time for the society to begin viewing women as capable leaders and not sex objects.

"In other areas women are getting elected, in fact without splurging huge amounts of money,"she said.

Women, she added can make better leaders than men especially when it comes to integrity in financial management.

"Most of us can't hire bouncers to beef our security, so they easily bulldoze us in politial rallies. This is where men do better," she said.

She said her community is yet to overcome some cultural barriers, which  suppress women ambitions for political office.

"We are still seen people who belong to the kitchen and the bedroom. This is something we are struggling to overcome . We are seeing some adjustments but not at the pace we anticipated," Onsarigo said.

"We have so many examples of where women have been elected as president and they excelled," Donya said.

"The only way to get out is by consciously voting women to office. Let's test them through the ballot."

The woman rep seat has attracted more than six aspirants.

In 2017,  29 per cent more women ran for office than in the previous election
Counties
2 weeks ago

Parties nominating 290 MPs are required to ensure that not more than 193 are of the same gender.
News - Page 6
1 week ago

IEBC asked to guard against election malpractices.
Counties
1 week ago

Chebukati urged the political parties to submit the revised lists not later than May 9.
News
2 weeks ago
“WATCH: The latest videos from the Star”
by MAGATI OBEBO Correspondent, Kisii
Nyanza
10 May 2022 - 22:00