• She noted that going forward, the party must remain united as the clock ticks towards the General Elections in August this year and record maximum votes.

• Buyu is making a second attempt to clinch the MP’s seat currently held by Olago Aluoch who was elected on a Ford Kenya ticket. 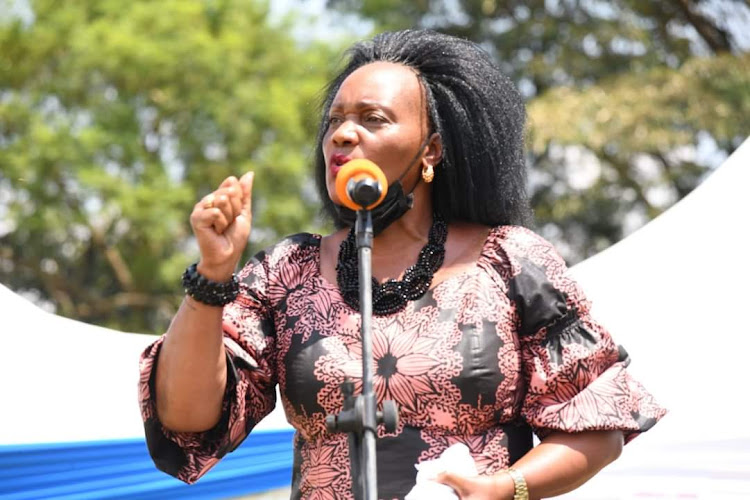 Buyu, who was nominated by the party to contest the parliamentary seat for Kisumu West said the outcome of the party nominations has left the voters and their preferred candidates scattered.

She noted that going forward, the party must remain united as the clock ticks towards the General Elections in August this year and record maximum votes.

“The nominations left the party supporters disenfranchised and it is now time to heal them to have the confidence of voting again in the General Elections,” she stated.

The woman representative convened a round-table meeting bringing together the party nominees and those who were defeated alongside party officials from the grassroots.

"The bonding sessions allow everyone to ventilate as they move on", she said adding that the party ticket is a hot cake as candidates put spirited efforts, some using many resources to cinch it.

“You know only one person can win a ticket for a particular seat. So what we are doing today is to bond and ventilate as we chart the way forward for the party,” she said.

She is making a second attempt to clinch the MP’s seat currently held by Olago Aluoch who was elected on a Ford Kenya ticket.

Olago is set to defend his seat, this time using the Movement for Democracy and Change (MDG), a party associated with Ugenya MP Hon David Ochieng.

“We have to vote six pieces, to ensure ODM gets numbers and that is our resolve,” Buyu said.

She said the party nominees and officials must work round the clock, combing villages to preach to them the importance of voting only party candidates.

Buyu noted that the policies and desires of the leadership of the ODM party will only be affected if they have numbers both in Parliament and County Assemblies.

She spoke in the backdrop of resentment from party loyalties in the Nyanza region following what they termed as shambolic party primaries.

The situation was worsened by the direct tickets that were issued out to various candidates from the Governor, Senator, and Members of Parliament positions without giving party supporters an opportunity to nominate candidates of their choice.

A number of candidates who claimed to have lost unfairly have since left the party and returned as Independent candidates’ posing a serious threat to those who were issued the tickets.

A case in point is Homa Bay County, where the party issued a direct ticket to Gladys Wanga, the current Woman Representative to contest the gubernatorial position, sidestepping former Nairobi Governor Evans Kidero who was ready for the party nominations.

Kidero has since been cleared by the Registrar of Political Parties to vie as an Independent candidate.

Buyu however noted that she is aware of the growing rebellion thus the step she took to bring all those who participated in the recent party primaries in her Constituency to iron out the differences and work as a team.

“Where we currently need a concerted effort by the party officials and the party nominees to cool down the tempers so that we deliver the win to the party and our party leader Raila Odinga, who is the Azimio La Umoja presidential candidate,” she said.

Maurice Roche who contested for Central Kisumu ward said the primaries were predetermined by the party.

Roche said the exercise was marred with a lot of irregularities denying the voters their right to cast their votes.

“The gadgets were a total letdown, some went dead while others had no pictures of the candidates,” he said.