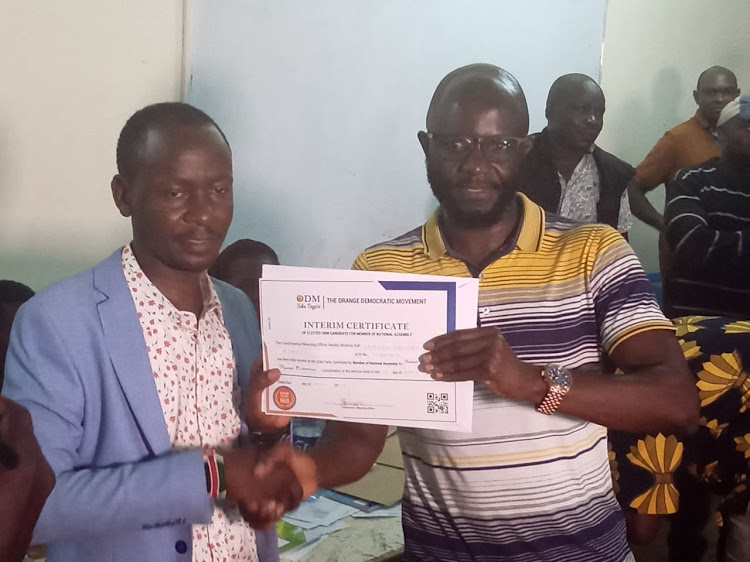 Alego Usonga MP Samuel Atandi when he was handed the nomination certificate at Siaya Institute of Technology on Wednesday, April 13, 2022.
Image: JOSIAH ODANGA

ODM primaries in Siaya county on Wednesday left aspirants reeling in shock with most of them poking holes in the process that saw incumbents clinch tickets.

The exercise was marred by violence in constituencies such Gem and Alego-Usonga where Elisha Odhiambo and Samuel Atandi were declared winners.

In some constituencies, there were delays in voting while the system deployed also failed to stop multiple voting in some of the centres where voters register were lacking.

Voters register help to identify voters in each polling station and in guarding against any possibility of repeat voting.

Yesterday, the party was unavailable to shed light on some of the concerns raised by the aspirants in regards to an exercise that has left the party's image battered.

The party chairman John Mbadi on Wednesday referred the Star to National Election Board to respond to the issues raised.

"It is the board which can address that," Mbadi said in a text message when reached for clarification.

NEB chairman Catharine Mumma was also not available for a comment on the issues raised by the aspirants.

"In Alego-Usonga constituency for instance, delays in voting were reported mostly  in my strongholds," Aspirant Kut Ochogo said.

Dr Kut was Atandi's main challenger. In the declared results at Siaya Institute, Atandi garnered 17,789 votes to beat Kut who garnered 3,350 while Jacklin Oduol had 542 votes, emerging a distant third.

"Even the results for Ochilo are yet to be announced more than 12 hours  after the party released the official results for the constituency," he said.

In some of the areas where I am popular, few  gadgets,  which had no tally with the number of registered voters per polling, were deployed."

Kut claimed this was done to deny him votes in his strongholds.

The NEB was also on the spot over how the officials who took part in the primaries were recruited.

The recruitment of poll clerks was allegedly done in favour of certain aspirants, giving undue advantage to the incumbent who reportedly had access to the team prior to the exercise.

The other concern raised by the aspirants was the distribution of kits.

"The distribution was skewed to favour the incumbent. At Segere, Boro, Liganwa, with higher voter population, single kits were deployed," Kut said.

"As an aspirant, we didn't have the opportunity to meet and discuss rules of engagement. The identity of the critical officers like the returning officers was also kept a secret," he added.

In the neighbouring Gem constituency, Jalan'go Midiwo has petitioned the ODM's  election board seeking the nullification of the certificate issued to Odhiambo.

" We have raised a number of issues in the petition which we need the tribunal to listen to and find that the nomination was a  nullity," he said.

Among the issues Midiwo cited in his petition was an incident where police arrested over 15 goons and confiscated hand-grenade, teargas canisters, guns, pangas, handcuffs and assorted crude weapons at Ndegwe polling centre in North Gem on Wednesday.

"The vehicles which the goons and known agents linked to Odhiambo  were using were also impounded by the police and are currently being held at Yala police station," he said.

Midiwo claimed that around 9.30am at Yala township primary school polling station, goons, while in company of the MP attacked former councillor Emmanuel Ominde.

"Ominde was my agent at the station,  he was seriously injured and is  admitted with head injuries at the Royal hospital in Yala town," he said.

He didn't provoke his attackers and was simply representing my interest at the station.

The attack was reported at Yala police station," he said.

Gem OCPD Charles Chacha on Wednesday said investigations have since been launched.

"At Dienya polling station, one of my agents was viciously assaulted and thrown out of the station by goons hired by the MP.  A similar attack targeting my agent was reported at Kambare and Lihanda polling stations," Midiwo said.

Violence was also reported at Kagilo polling centre, when an agent representing Midiwo and the body guard of Millicent Ofula an MCA aspirant allied to his camp, were attacked.

"At Karuwa polling station where I am registered as a voter and is my stronghold, the voting was delayed up to midday. By 3pm a torrential rain scared away most of the voters who were still lining up to cast their ballot," he said.

The reason given by the lead officer overseeing the exercise at the centre over the delay was that the appointed presiding officer had disappeared and a new one was appointed.

"Given the above cited cases and occurrences witnessed during the exercise in the constituency, it is without a doubt that the MP interfered, disrupted and obstructed many voters from exercising their democratic rights to elect a leader of their choice," he said.

"His conduct, as exhibited shows his utter disregard and respect to the party elections rules as prescribed.  I would therefore appeal to my party to ensure he receives a befitting disciplinary action in regards to his conduct during the nomination exercise," he said.

In a rejoinder shared on social media platforms, the Gem MP distanced himself from the allegations by Midiwo.

"I have had the opportunity to read a statement by my opponent Dr Jalang’o Midiwo and I wish to state that his allegations are false, frivolous," he said in the post which was widely shared.

He said the allegations are meant to taint his image with an expectation of the complainant gaining some undue advantage and sympathy.

"Around 5:30pm today (Wednesday) , the 15 alleged goons were arbitrarily arrested,  randomly from among my supporters near the polling station, some having voted and some having not in the party primaries conducted today April 13, 2022, denying the latter an opportunity to exercise their democratic right to vote for a candidate of their choice," Odhiambo said.

He claimed the allegations by Midiwo were a well planned script by some of his organisers geared towards portraying him as a violent man,  contrary to his true nature and character.

"None of the vehicles allegedly impounded belong to me and are in no way associated with me hence should not be linked to me," he said.

"The police involved in the arbitrary arrest of my innocent supporters whose only offence was to go to a polling station must have been compromised through bribery."

Party primaries must respect people’s will

In modern democracy, party primaries have become a consequential part of the election process.
Opinion
9 months ago

The nominees said direct ticketing is hurting the party and it is time it was stopped.
Counties
9 months ago

Chaos in Ndhiwa ODM primaries as aspirant's agent is attacked