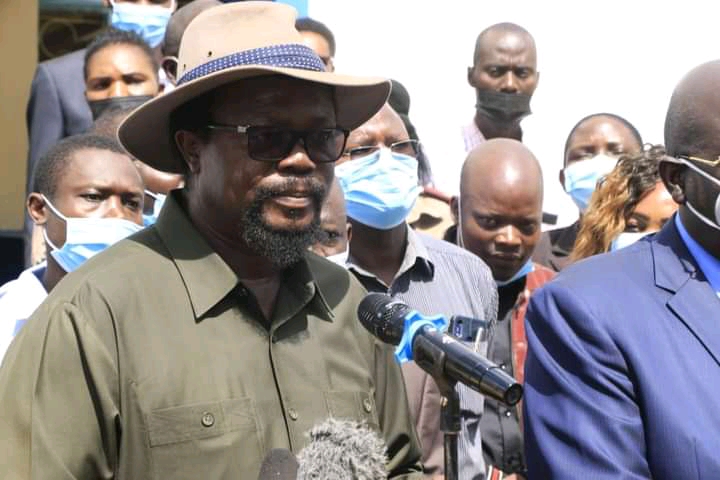 They also want him to stop dangling demands on Azimio leader Raila Odinga, saying the focus should be on securing his victory.

Party boss Wafula Wamunyinyi said it makes little political sense for each Azimio affiliate party, like Wiper, to give demands.

"We must be focused on the bigger picture not giving demands or sideshows," he said.

Ongeri defected from ODM to DAP-K on Thursday last week.

"We told Kalonzo to come and do so in good faith. He should stop trying to change the name to Azimio-One Kenya. Oka died long ago," Wamunyinyi said.

He told Kenyans to rally behind Raila saying he has the the requisite experience to run this country.

On his part, Savula said DAP-K aspirants will have fair nominations.

He said Kalonzo should rally his foot soldiers behind Raila instead of making demands.

Wamalwa on his part said the state is working with the Kisii government to complete the banana factory.

He told the electorate to back Ongeri on his gubernatorial bid saying he is best placed to succeed Governor James Ongwae.

"I have worked with James Ongwae as the Kisii governor and he has done a great job. Ongeri can best steer the ship forward," Wamalwa said.

Ongeri called for peaceful campaigns saying Raila will form the next government.

I will persuade Wetangula to join Azimio, Kalonzo says

He said that they had gone through a lot together.
News
8 months ago

Kalonzo: I'll only give up running mate for one third of government

He was interviewed on Kamba FM station, demanding a chunk of government.
News
8 months ago

Kalonzo to Kenyans: Stop talking about me, focus on your kids' food, jobs

On March 14, Kalonzo said they didn't know what they signed in deal with Raila's Azimio.
News
8 months ago
Post a comment
WATCH: The latest videos from the Star
by MAGATI OBEBO Correspondent, Kisii
Nyanza
23 March 2022 - 22:00
Read The E-Paper